The week of August 9th – 16th  I attended the Puppeteers of America national festival at the University of Connecticut.  I spent seven days participating in puppetry workshops and attending puppet shows.  I also visited several puppet exhibits around the campus.  When I got to the Thomas J. Dodd Research Center, where the “Puppets:  Easy to Make! Fun to Use!” exhibit was housed, this marionette caught my eye so I asked if I could take some photos.

As I explained my interest in black dolls to the archivists, they encouraged me to look through the finding aid for the Phyllis Hirsch Boyson Artifacts Collection**.  Boyson trained as a teacher in the mid 1950s.  She loved sharing folk tales from different cultures with her students and frequently used puppets to help act them out.  When she passed away, her family donated over 100 boxes of artifacts and about 6,000 monographs to the Northeast Children's Literature Collection.

Boyson sought to provide her students with images representing diverse ethnicities and cultures but most of the dolls and puppets that were commercially available in the early years of her career would be regarded as racist stereotypes today.  Having waded through some radioactive racist waste dumps in other archives, my sense is that Boyson curated her collection by selecting figures that had a more human character than most other dolls and puppets of that era.  There are more modern dolls and puppets dating through the 1960s and 1970s in the collection including some Shindana dolls.  Since my time was limited, however I only requested items from 1940 or earlier.

One of the disturbing things about black dolls of the early twentieth century is that they usually depict blacks in menial occupations.  This porter is the 1920s idea of a black action figure: 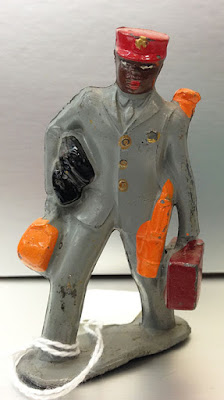 The figure below is a black Frozen Charlotte doll.  Such dolls take their name from a 19th century ballad about "Fair Charlotte" who froze to death on a sleigh ride because she was too vain to wrap up and cover her pretty dress.  Usually made of china and molded in one piece, Frozen Charlottes were popular from about 1850 to the 1920s.  They frequently populated doll house displays.  While the provenance and purpose of this miniature diorama remain unknown, the black Frozen Charlotte doll may have been a washroom attendant. 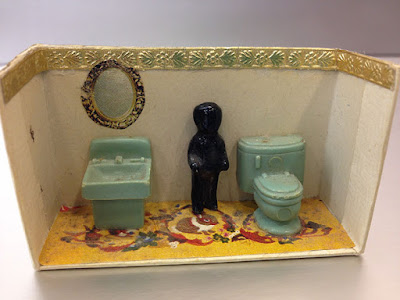 Career opportunities were indeed limited for African Americans in the early twentieth century. 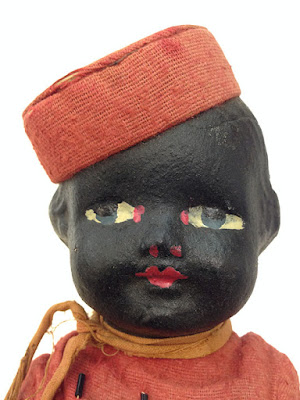 While his head and hands may have been commercially manufactured, this 1912 bellhop's cloth body was probably hand made: 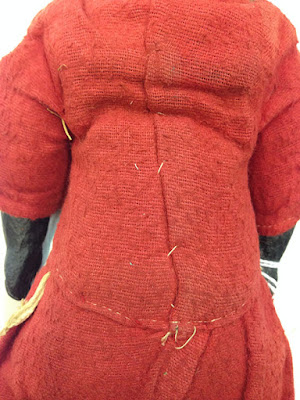 Notice that his face and hands are a different color from his body: 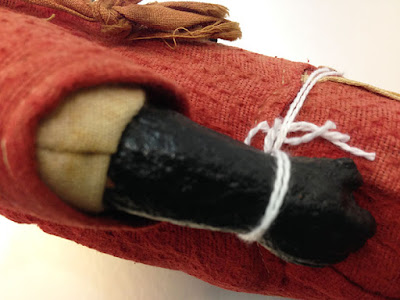 This limberjack puppet was also a bellhop: 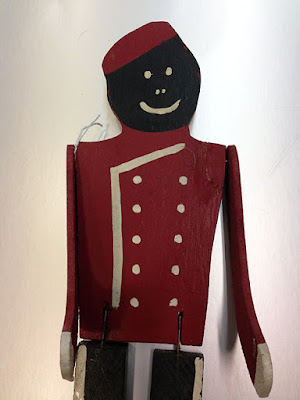 Although his original control mechanism is missing, puppeteers probably suspended him from these staples in a way that left their hands free: 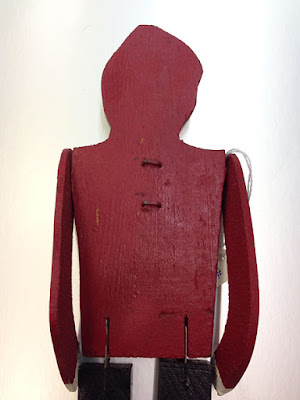 This way they could make him dance by jiggling their knees while playing a musical instrument.  19th century audiences found black dancers so entertaining that white performers began blacking their faces and copying steps from them.  Thus was born the minstrel show.  Whether he was a toy or a street busker’s prop, a puppet could be just as amusing as a live entertainer.  While this one dates from about 1960, European street performers used this type of puppet as far back as the Middle Ages.


African American women often worked as childcare providers so for many people the archetypal southern mammy evoked warm memories of being nurtured and comforted.  Thus mammy dolls and figurines of all types were very popular before the Civil Rights movement: 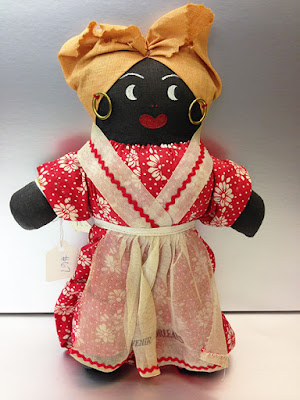 This mammy was a souvenir of New Orleans circa 1940.  She is very soft and cuddly and unlike some of the more grotesque caricatures that existed in that time, she has a friendly face: 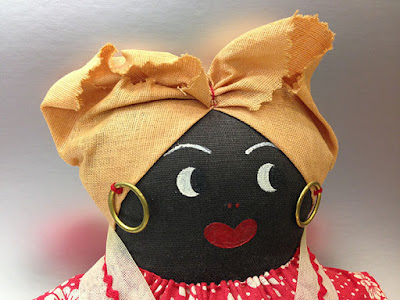 Besides providing childcare, African American women frequently served as cooks.  One of the most famous kitchen mammy characters was Aunt Jemima.  African American comedian and dancer, Billy Kersands wrote a song about “Old Aunt Jemima” in 1875.  Kersands was one of the most acclaimed and highly paid performers on the minstrel circuit and the Aunt Jemima character became a popular staple in minstrel shows.  In 1890 the R.T. Davis Milling Company hired Nancy Green to portray Aunt Jemima as a spokesperson for their pancake mix.  She traveled the country giving cooking demonstrations until her death in 1923.  Several other African American women portrayed Aunt Jemima after Quaker Oats acquired the brand in 1926.  Many licensed products such as dolls and figurines served to further enhance brand recognition and customer loyalty.  This fellow who was one of Aunt Jemima’s children dates from about 1920. 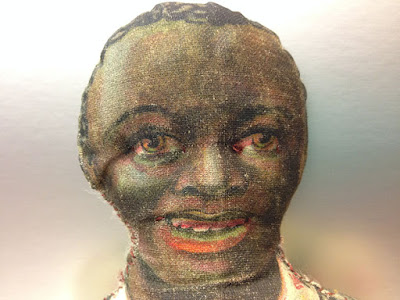 His tattered clothes suggest that all African Americans were impoverished country yokels but at that time, many did suffer economic hardship in the rural South.

For decades after the Civil War, many southern states still based their economies on growing cotton with cheap labor.  Sharecropping became a system of debt peonage that effectively confined most freedmen and their families to agricultural occupations.  This clothespin doll circa 1930 depicts a woman transporting a basket of raw cotton on her head:

While her face is a more grotesque caricature than most of the other items in the Boyson collection, she appears to be a handcrafted, rather than mass manufactured product, possibly a West Indian souvenir. 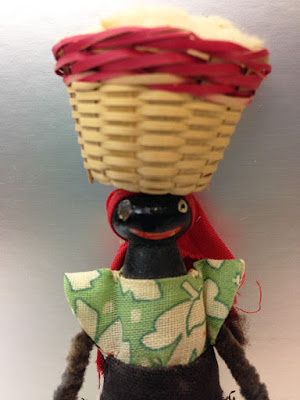 Thus her crude features may reflect lack of artistic skill along with a stereotypical image of black women.

In contrast this figurine dating from about 1920 renders ethnic facial features with skillful attention to detail despite the stereotypically red lips and cheeks: 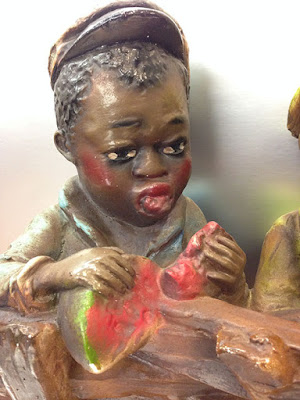 Watermelon cultivars are native to Africa. 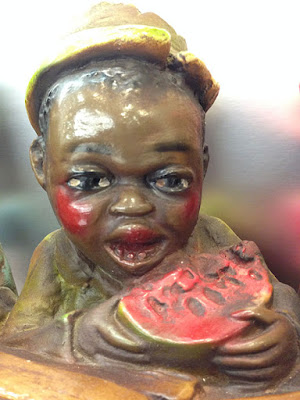 Enslaved Africans brought the plant and knowledge of how to grow it to the Americas where it became firmly established in the 17th century. 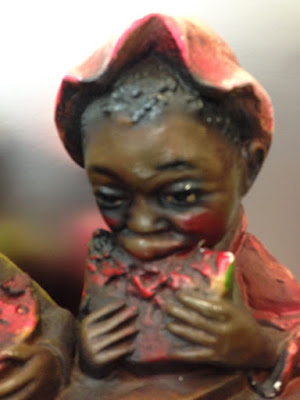 Racist stereotypes attributed an inordinate fondness for the fruit to African Americans and often depicted them as watermelon thieves.  Thomas Edison’s fledgling film company released “Watermelon Eating Contest,” an 18 second short featuring two African American men eating watermelon in 1896.  The film proved so popular a 2-minute re-make with four contestants followed in 1900.  When they were not presented in service occupations, African Americans were usually portrayed as lazy and shiftless.  Yet chilling with a juicy slice of watermelon on a hot summer’s day is a human pleasure that cuts across all races, colors, and creeds. 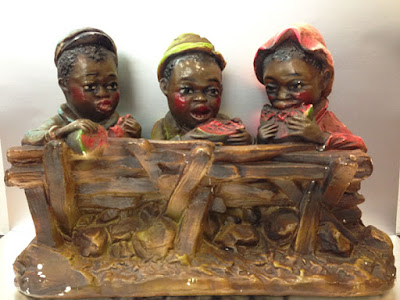 Still not all black dolls of the era perpetuated racist stereotypes. 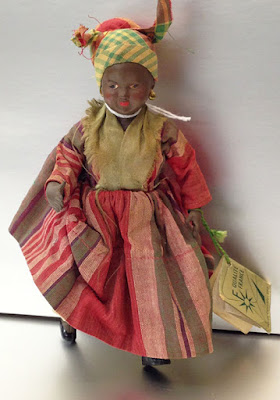 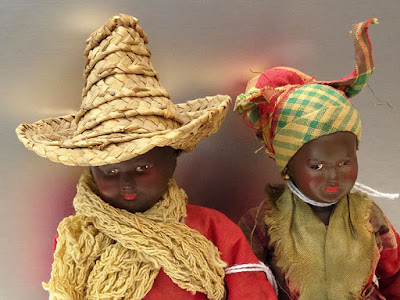 …but would-be suitors can still try! 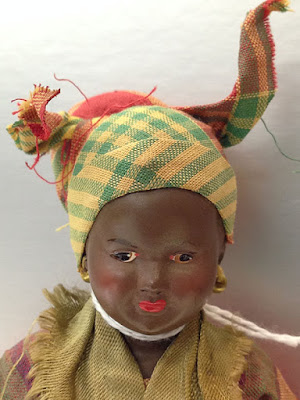