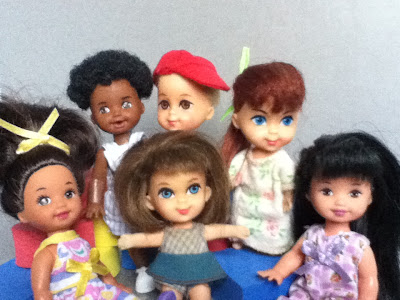 Ms. Leo recently catalogued many of the infant and toddler-sized dolls that add joy to our 1:6 scale doll families so I am chiming in to show that before there were Kellys, there were Kiddles. 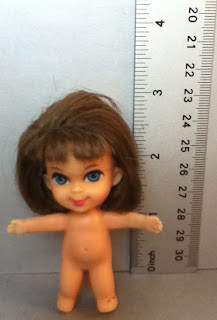 Mattel marketed these 2 1/2" - 3 1/2" dolls as a separate brand but I usually used them as babies and toddlers in my Barbie families.

Lola Liddle was the first Kiddle I received. 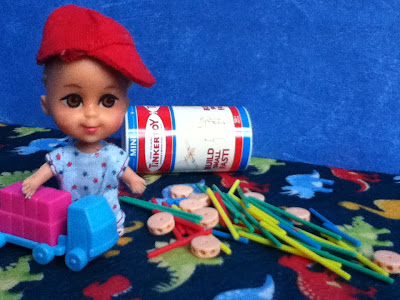 She is one of the original 24 Kiddles introduced in 1966.  She wore a red sleeveless shirt with a white sailor collar and white pants. 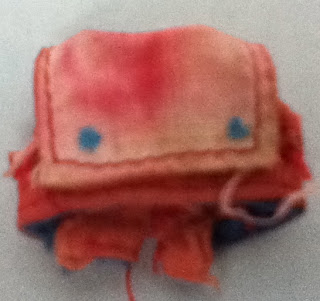 She also had a sailboat and a plastic sailor's cap. 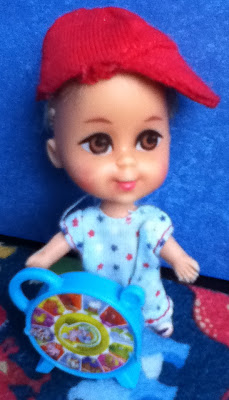 I no longer have her boat and  I cut her hair at some point because one of my Barbie families needed a son.

Babe Biddle came with a yellow convertible sports car (not the one in this picture) and she had a blue headscarf to keep the wind from mussing her hair. 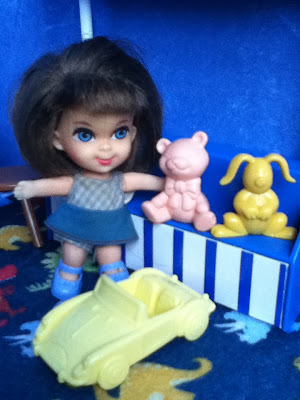 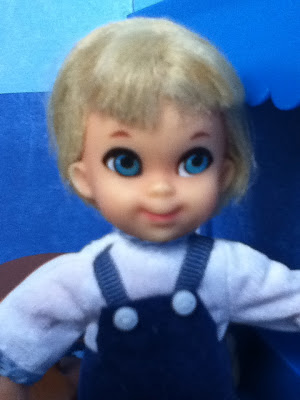 I still have her pilot's helmet and jumpsuit. 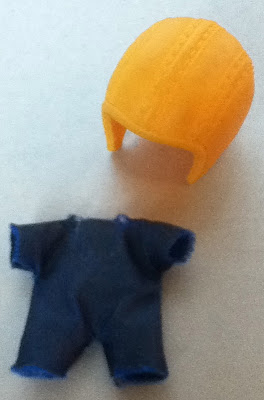 Since her hair was short, the Zacker family adopted her as a son. 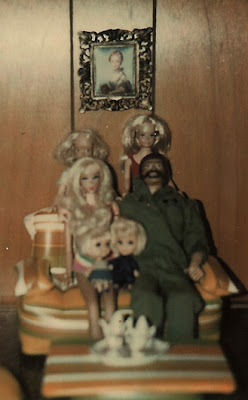 At some point I upgraded "Bert" to this taller, unidentified body. 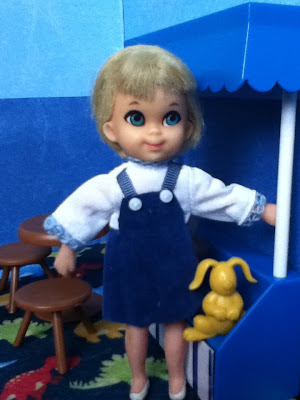 My mother confiscated Soapy Siddle from some hapless child who was playing with her in class. 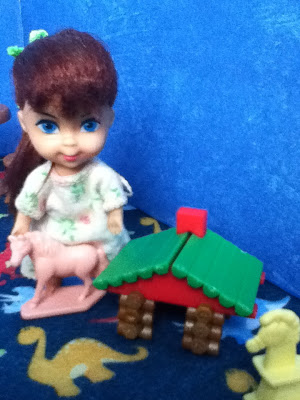 She presented the doll to me at the start of a trip to see our paternal grandparents.  While Miss Siddle was wearing her red striped bathrobe, I never had the claw foot tub that came with her. 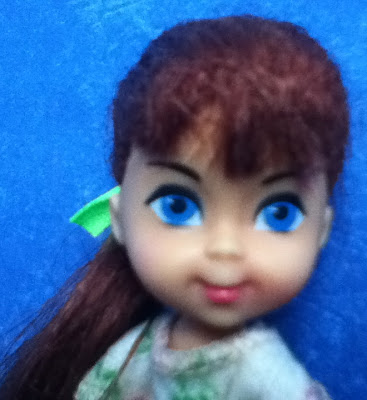 Still she kept me occupied for hours on that long drive.

À Bientôt
Posted by limbe dolls at 3:18 AM 3 comments:

Since MGA Entertainment introduced the Bratz dolls in 2001, the "girls with a passion for fashion" have given Barbie a stiff run for the money.  Mattel and MGA spent over 5 years in court each arguing that the other had copied its designs.  In the 1970s, however, Barbie faced an even more popular rival -- she stood only 6.5" tall and her name was Dawn.


Topper, a brand of the Deluxe Reading company, produced Dawn dolls in mass quantities from 1970-1973.  Reading's strategy had been to place dolls and other toys for sale in grocery chains and variety stores rather than in department stores.  The space on the top most shelf of the supermarket aisle was a dead zone where shoppers were not likely to look for grocery items.  Yet a child seated in a shopping cart could easily see Reading's brightly packaged toys there and the inexpensive prices made parents more willing to humor their children's whims.

Dawn's diminutive size also enabled smaller retailers such as drugstores and five and dime stores to carry and display the full line where they couldn't dedicate enough shelf space to fit the full line of Barbie dolls and accessories.


Further, a girl could fit a dozen Dawn dolls and a large selection of the original 44 outfits in a compact case where a colony of Barbies and their paraphernalia would threaten to overrun the house.

Mattel fought back with the Rock Flowers dolls.


Topper, however, also used television advertising effectively and gained a strong foothold in the market.

I don't remember seeing Dawn commercials or Dawn displays in the stores when I was growing up but I did have a lot of fun with a set of Dawn paper dolls.  It may be that Dawn was disappearing from the shelves by the time I became aware of her for unfortunately, her small size made it difficult for Topper to come up with enough new fashion ideas to keep girls interested.


Having started with a Model Agency, then released dolls with "Dancing," "Flower Fantasy," and "Majorette" themes, as the company lurched towards bankruptcy in 1973 its designers were unable to invent fresh scenarios for the characters.

Starr Doll by JPI attempted to recapture this niche between 1994 and 1998 with a line of 7 dolls who were models for the Starr Model agency. 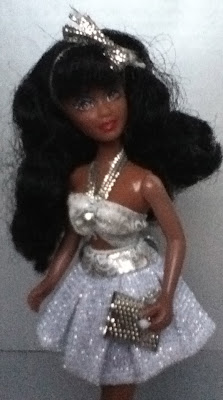 I bought Toya, the African American one at a Toys R Us in Miami in 1994.  Later in the 90s I found her a husband and daughter at KB Toys in New Orleans. 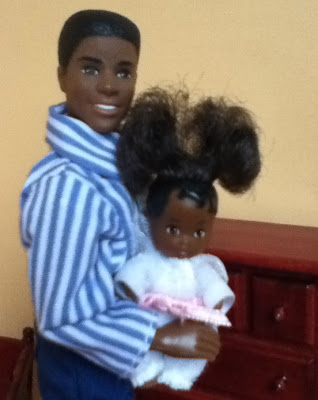 I don't remember who made them or what they were called.  There was a corresponding adult female doll as well but I didn't purchase her because I already had Toya and she was not interested in sharing the man. 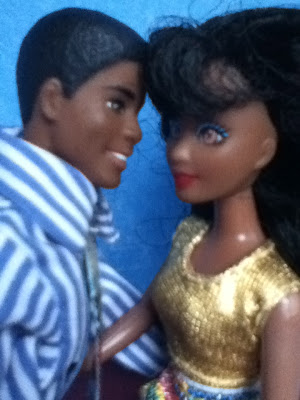 Still I gave two of these families to the daughters of a friend.  The girls' parents approved of the fact that the baby was packaged with the father instead of with a single mother.  They took the opportunity to impress upon their daughters that they should get a husband first before they have a baby.  :-) 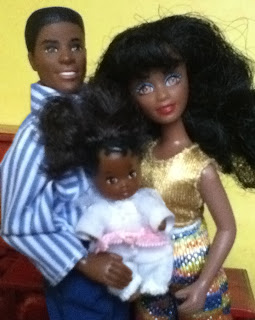 My original Dale and Dawn dolls became body donors for Little Kiddles who were members of my Barbie families but in 2006 I purchased this Toy-O-Rama reproduction Dale doll and several outfits at K-B Toys in Savannah, GA. 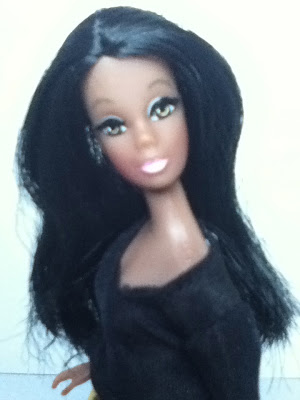 Toya rolled her eyes, sucked her teeth, and grumbled about "that man-stealing heifer" until I explained that she was homeboy's sister.  Then she was very happy to borrow Dale's clothes.

The repro versions of Dawn did not last long in the market but you can find them and many of the original dolls and fashions in good condition on eBay.


It looks like MGA has committed to continue with the taller Bratzilla's bodies.  Yesterday I spotted the new Magic Night Out girls in Target.  I like the fact that these dolls have feet but unfortunately Cloetta Spoletta had suffered a wardrobe malfunction: 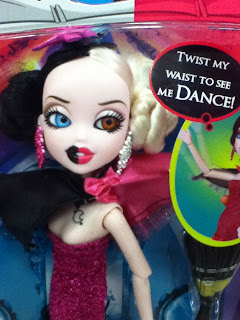 The package was intact so I guess she just had a wild night.  :-)

À Bientôt
Posted by limbe dolls at 3:52 AM 8 comments:

Thanks to the generosity of Ms. Leo, Heidi has a warm sweater to wear on her ski vacation.

Heidi and Bianca hope to spend a few days on the slopes before the semester starts up again. 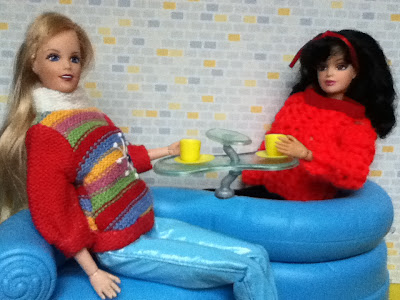 I'm usually not lucky with contests so I was thrilled to win the sweater give away.  I especially like the snowflake detail on this sweater. 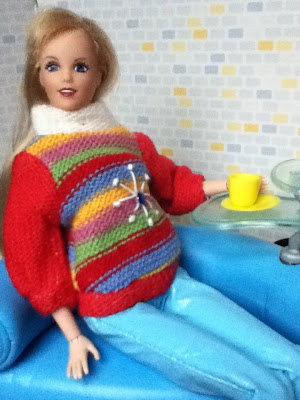 I made Bianca's sweater sometime in my teens. 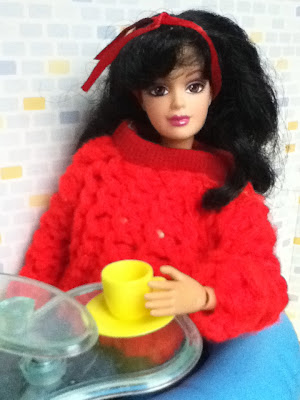 It is the only sweater I have ever knitted and no-one has worn it for years because it is so hard to put on.

Bianca is thankful that Vanessa of Van's Doll Treasures shared her trick of covering dolls hands with saran wrap while dressing them in sweaters.  Otherwise she would not have gotten this modeling gig!

À Bientôt
Posted by limbe dolls at 5:34 AM 6 comments: