I have given up buying dolls for Lent so I was doubly grateful to receive a doll as a gift in the midst of this doll drought.

Back in September, D7ana of A Philly Collector of Playscale Dolls and Action Figures profiled a blogger who had recently published a post on “Buying Dolls Blind.”  I heartily concurred with the author’s preference for the interesting diversity of off brand face molds vs. the homogeneity of Mattel faces, so I struck up an email correspondence with her.  Turns out that in addition to our passion for dolls, we both have Cherokee ancestry.  Teresa has been kind enough to teach me some words in the Cherokee language so I sent her a Kari Michelle doll I had customized with three wigs and an African ensemble.  Recently she reciprocated with Omec Toys’ Elise in a hand-sewn, African-styled outfit:

I loved the idea of a black-owned toy company from the first time I picked up one of the Olmec Toys’ products and read about the company’s mission on the box. In short order I collected Imani whose face was modeled after Yla Eason, founder of the company -- 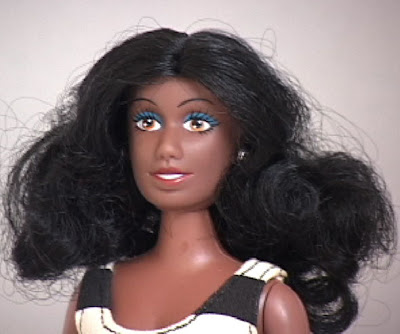 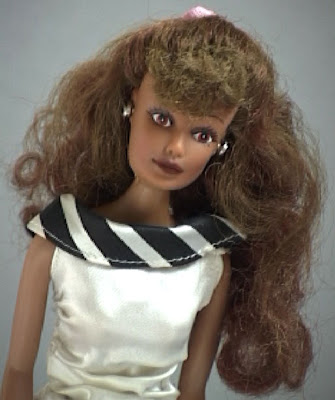 With her mocha complexion and long, auburn locks, Consuelo looked like one of my cousins.  I had an earlier version of Consuelo with a lighter complexion, but she had a bad hip so I gave her away.  For more information about Yla Eason and Olmec Toys, see Debbie Garrett’s excellent post on “Moments in Black Doll History – Eason’s Positive Toys for Our Children.”

In the late 80s and early 90s many of my ladies were “waiting to exhale” since the black man shortage was reflected in the doll world.   I was therefore very pleased to find, Menelik at Target in Columbia, South Carolina during the 1992 Christmas season.  He is still a shinning black prince despite the dated hairstyle. 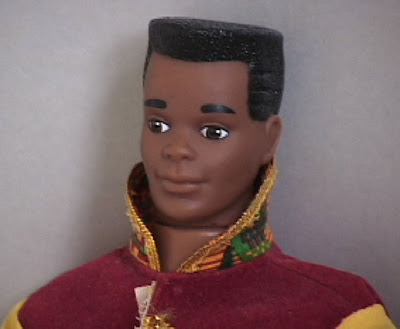 Fortunately, the line of outfits Olmec Toys sold through major retailers like Kmart has a more timeless appeal.  Here Imani steps out in a tank dress with bold black and white stripes.

She has the same face mold as Imani, but I like this face much better without the blue eye shadow.

The hair on these dolls was not the highest quality fiber.  I always wanted to re-style Imani’s flyaway tresses, but I thought I should leave her as close to her original state as possible.  I immediately scalped Elise, however, so that she could wear this cap of short locks. 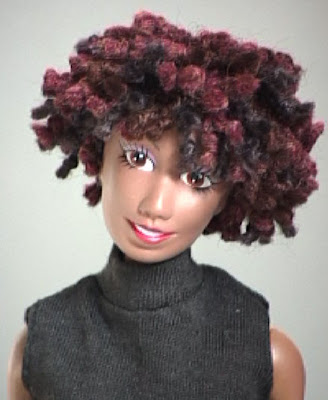 One of the greatest benefits I have experienced since I started blogging last April is the friendship and generosity of fellow doll enthusiasts. It was very hard to resist buying new dolls while I was on spring break, especially since my godfather spoiled me rotten and I had money burning holes in my pockets, but Teresa’s lovely gift saw me through.  Now, with only nine more days ‘til Easter I have a long list of new dolls I would like to buy, but Olmec Toys will always have a very special place in my heart.

P.S.  This week's tutorial is on making lattice crust pies: