A few weeks ago Debbie Garrett of Black Doll Collecting sent me two of these fashion doll heads: 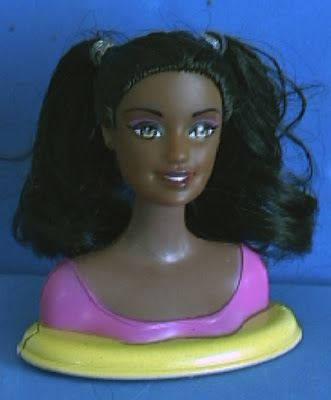 These are the first black dolls we have seen in Dollar Tree in about five years.  I had already snapped up six of them but I was delighted to have more.  I just wish they had been available in May before the Atlanta Doll Collector's show.  It would have saved me from having to paint the white ones I bought to serve as wig models.

I like the face mold in both the red-headed and African American versions so I quickly promoted one of the ones I received from Debbie to a dark Liv Alexis body.  Next thing you know she's hosting a Yoga show!  Introducing Bea Garrett in "Yogalicious:"