Fulla plans to become a dentist

so she always takes meticulous care when brushing her teeth. 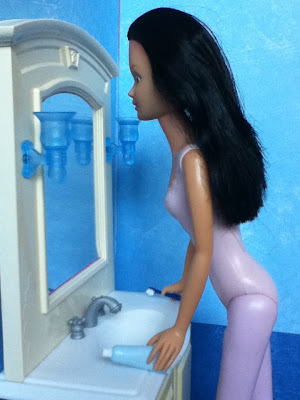 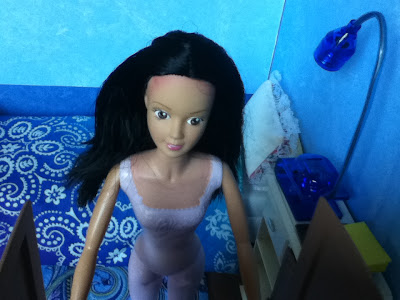 The weather has been sultry so she selects a breezy t-shirt dress.

She especially likes the grapes stenciled at the hem. 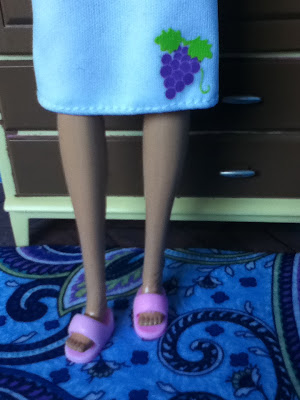 Next she sits on the bed to slip on matching purple shoes. 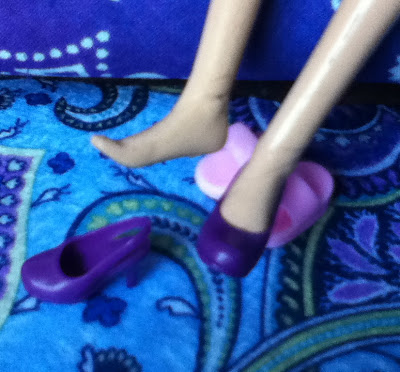 Then she crosses to her dressing table and starts tucking her hair up. 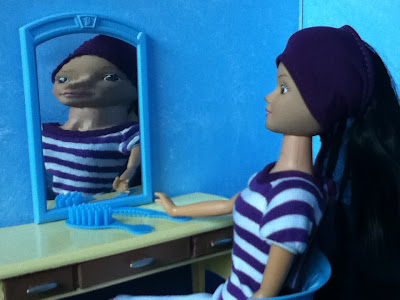 Her hijab continues the grape theme with a purple border. 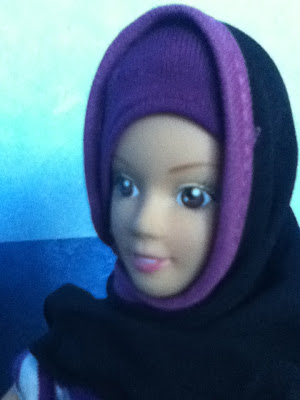 Once she has donned her ababya, she tucks her school books under her arm and heads out. 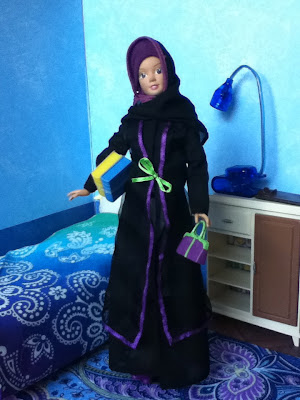 Since it is Ramadan she will pray at the mosque before class instead of stopping for breakfast. 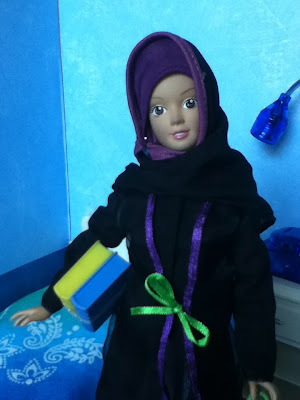 Fulla knows her mind should be focused on more spiritual concerns but she can't help feeling pleased with the purse that completes her ensemble. 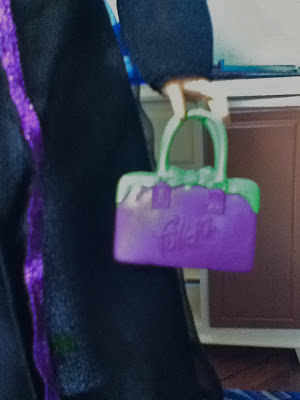 For many conservative Muslims, Barbie (with her scandalously short skirts and voluptuous figure) represents the antithesis of womanly virtues.  Sales of Mattel's Barbie have therefore been banned in Saudi Arabia since 1998.  The Iranian government followed suit by commissioning the 16" Sara and Dara dolls as a wholesome replacement for fashion dolls like Barbie.  Sara and Dara are eight year old siblings who star in a series of children's picture and audiobooks.

By 2012, when Iran banned the sale of Barbie dolls, the movement to provide Muslim youth with wholesome alternatives had been underway for quite some time.  As early as 1996, Ammar Saadeh, a Pakistani based in Detroit created the pre-pubescent Razanne doll to promote self-esteem and positive moral values in Muslim girls.  In one version she even appeared as a Muslim scout with an ankle-length green uniform dress and a white hijab.  Razanne came in three complexions representing the diversity of the global Muslim ummah (community) --  black hair with olive skin, black hair with dark skin, and blonde with fair skin.  Unfortunately the Noorart website that distributes Razanne dolls in the U.S. currently seems to be out of stock.  Still, you can occasionally find Razanne on eBay.

The market for modest Muslim fashion dolls grew so rapidly that in 2006, Simba Toys Middle East (a subsidiary of the German Simba-Dickie Group), launched a new entrant -- Jamila.  Where other Muslim fashion dolls avoided the issue of pre-marital fraternization with the opposite sex, Simba Toys provided Jamila with a fiance named Jamil who later became her husband and the father of their two children, Asad and Almira.  Disney's Aladdin is something of a buffoon while Mattel's Tales of the Arabian Nights Barbie and Ken Doll gift set reflects "Thief of Bagdad" orientalist stereotypes.  Jamil is therefore a welcome positive representation of an Arab or Muslim male.  Fulla also has an Indian friend, Sunayana and an Ethiopian friend, Kareema.

Fulla, however, is the most popular Muslim fashion doll.

NewBoy FZCO starting working on the Fulla doll concept in 1999.  They tried at least ten faces before launching Fulla in 2003.  Fulla dolls destined for the Saudi Arabian market were dressed in the requisite abaya and hijab required of all women who appear in public, but Fulla was not always veiled in other markets.  Even when she is veiled in the box, under her abaya she dresses like a typical teen from anywhere in the world.  While her skirts never rise above the knees and her shoulders are never bare, Fulla may sport jeans and t-shirts and she has many trendy accessories.

To date Fulla has a brother, Bader, and a sister, Noor.  These dolls are both toddler-sized which allows Fulla to express maternal instincts without becoming a mother herself.  She also has two friends -- one blonde and one red head with green eyes.  Although Fulla appears in a series of traditional costumes from India, Egypt, and Morocco, she does not have any friends of Asian or African descent.

Fawaz Abidin, Fulla's brand manager attributed her popularity to the fact that "Our advertising is full of positive messages about Fulla's character. She's honest, loving, and caring, and she respects her father and mother" (Zoepf, Katherine "Bestseller in Middle East:  Barbie with a Prayer Mat" in The New York Times.  September 22, 2005).  Early ads showed Fulla saying her dawn prayers or engaging in domestic tasks such as baking a cake.  Later Fulla entered professions that NewBoy deemed suitable for women such as dentistry:

This animated commercial for dentist Fulla is also an example of her burgeoning career in movies.  Indeed Fulla has become a lifestyle brand with licensed products ranging from chewing gum, breakfast cereal, and flavored milk to bicycles and backpacks.  Here is a BBC report on the Fulla phenomenon:

In "Islam and Barbie:  The Commodification of Hijabi Dolls," Faegheh Shirazi asserts that  "a clever marketing strategy that utilizes and exploits religion" rather than a religious ideological trend.  Still, I appreciate Fulla and her muslimah sisters for representing a different world view.