Back in February and March, Hey It's Muff was playing with a flocking set she got on sale and was generous enough to share the techniques she developed in a series of tutorials.  Muff made it look like so much fun in "Well Flock You Too" that I wanted to try.  Unfortunately, I could not find any flocking in the craft stores and didn't want to order any online.  My big chance came when I ran across some cheap glitter powder in Michael's. 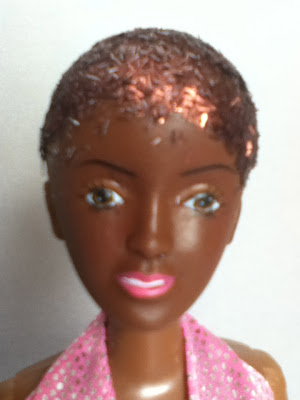 This lady was a Dollar Store Diva.  I had more than a dozen of these heads to play with so I tried flocking four of them with different colors of glitter powder.  The gold was the most spectacular, but when I sprayed on acrylic sealer, most of it turned white so Miss Coppertop ended up with the most successful do. 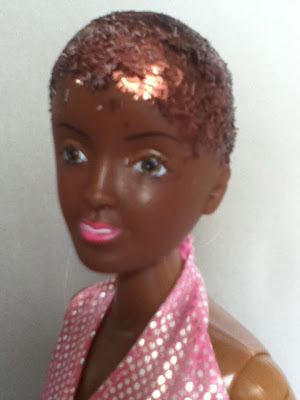 The glitter powder made such a mess that I was not eager to experiment with it any further.  Fortunately Muff did another tutorial on customizing "Hair and Lips with Modeling Paste."  It's a good thing I had a 40% off coupon from Michael's because the modeling paste was expensive.  Still, my first efforts were encouraging enough to make the price seem worthwhile.

To make this style I slathered on a layer of modeling paste, then I took one of the myriad of doll brushes I have accumulated and pressed it into the paste all over the doll's head.  As I pulled the brush up, the paste formed peaks that look like a short, natural texture hairstyle. 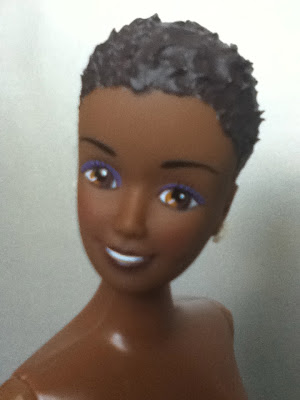 Next time around I used a spare doll comb to make a side part in Teresa's new do. 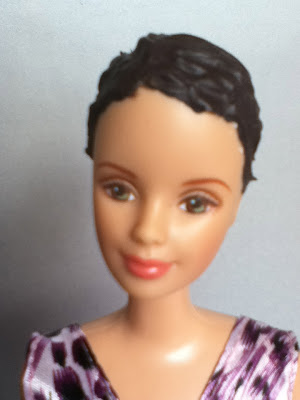 Then I dragged it through the paste in a squiggly motion to make waves. 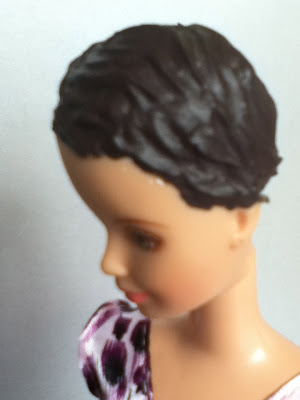 Kari Michelle is one of my all-time favorite face molds.  Somehow she has always looked better with short hair. 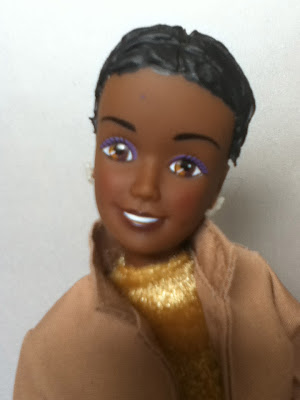 This was supposed to be a cornrow hairstyle.  I used a toothpick to section the "braids" but when I got to the back of her head, they were so close together you couldn't really tell they were braids so I didn't bother to add the detail that would look like braided strands. 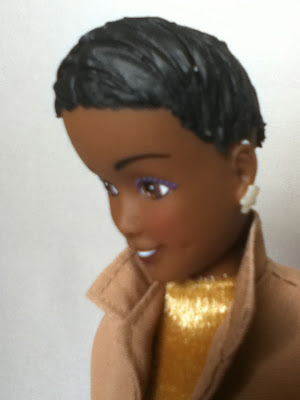 I already had the Elektra Barbie when I found this one in the discount bin at a doll show.  I scalped her but didn't find much for her to do until I started experimenting with modeling paste hairstyles. 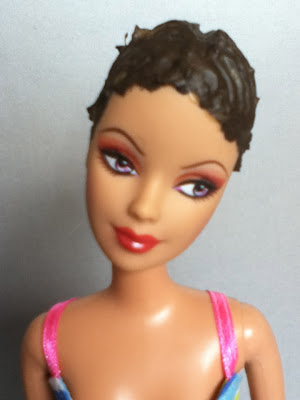 I made this wavy, center part hairdo by dragging a comb through the modeling paste just as I did for Teresa. 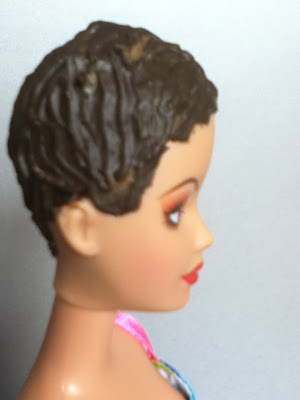 This doll was a Kmart clone that I bought circa 2005.  I used a toothpick to part her modeling paste "hair" in a grid pattern.  Then I put dollops of modeling paste in the center of each square to make bantu knots. 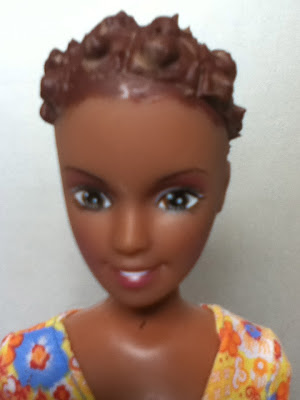 I'm in the midst of a major "lifestyle colonic" so all these ladies are bound for the Goodwill.  I just didn't want to send them off bald headed.  Now all the other Ayamedia actresses are clamoring for a chance to go to the salon and get short do's they can sport in between roles.

Many thanks to Muff for the inspiration!