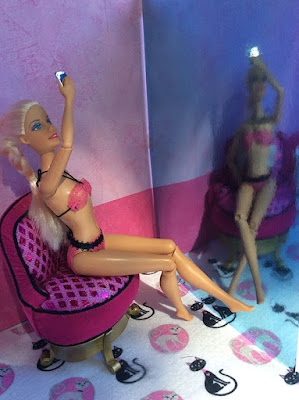 In the Nokia N8 Pink “Freedom” video, the dolls perform in front of a bank of phone screens that would stand four stories high in 1:1 scale and the video ends with the main doll dancer framed in a double mandala of Nokia N8 Pink phones that display her image on screen.  Is she a fetishized object of the male gaze?  Or does the phone serve as a mirror that allows the user to take pleasure in her own to-be-looked-at-ness?  79 Flickr groups are devoted to cell phone self-portraits including one for women photographers who upload cell phone shots of their own cleavage.

An October 14, 2010 Engadget review of the Nokia N8 phone notes that Nokia is “is the number one camera manufacturer in the world by sales volume” and raves that the N8 is a phenomenal camera with its “1/1.83-inch (12 megapixel) sensor, Carl Zeiss autofocus lens, mechanical shutter, and Xenon flash.”  Whoever holds this phone therefore commands a powerful tool for capturing the objects of his or her gaze.

Fashion dolls are the preferred photographic subjects for 3,232 Flickr groups and my June 5, 2011 search for photos of “fashion dolls” yielded 123,551 results.  Additionally, a You Tube search for “Barbie dolls” yielded 10,700 results.  Not all of these are original fan videos.  Fans also upload historic Mattel commercials for Barbie dolls.  Nevertheless, there is an ever-expanding number of original dramatic pieces using puppetry or stop motion to animate dolls and most significantly, women and/ or children produce the majority of these videos.

Working in doll scale with digital imaging technology empowers previously marginalized populations (including the women of color excluded from David Wilson’s “world of hot pink and the glamour that goes with it”) to direct their own gaze on the world and represent their own experiences.  Yet the mash up of decontextualized images à la Lady Gaga can reinforce the hierarchy of visual aesthetics that objectified and dehumanized people whose appearance is other than the white male aesthetic ideal.

The Nokia N8 Pink “Freedom” commercial abounds with decontextualized visual allusions.  In addition to direct quotation from Busby Berkeley, the piece also harks back to Loie Fuller, a pioneering choreographer and lighting designer of la Belle Époque in the sequences where a doll chrysalis emerges from a billowing swath of silk.  The clips that show a nude doll astride a pink fawn reference the myth of Lady Godiva who rode naked through Coventry, shielded from Peeping Toms only by her long hair.  The final apotheosis in which laser beams stream from the phone breasts of the three doll dancers enacts the life-giving power of the ancient triple goddess as cosmic mother.  Whether viewers or even the creators of the piece recognize these allusions is another matter.  And what they make of them if they do is an even broader question.

When the Jett doll’s head rotates 180 degrees in the beginning of the commercial, most viewers associate this shocking image with horror films such as “The Exorcist’ or the “Child’s Play” series in which a doll named Chuckie comes to life and murders a long succession of victims.  Thus they place the video in the mimetic realm of fantasy and horror without necessarily recognizing its horrific relationship to the antithesis of “Freedom” – bondage.  The miniature pink phones that cover the doll dancers’ breasts are strapped on with spiral black cords reminiscent of the cords that traditionally connected landline phones.  Yet these cords also encircle the dolls’ waists and ankles, evoking sado-masochistic chains.

I believe that the meaning of an image or icon cannot change completely until social attitudes have completely changed. If the icon was created with racist or sexist intent and the society is still harbors racist or sexist attitudes, then the image, and any simulacra derived from it continue to resonate with that derogatory subtext unless the artist places the image in dialogue with the historical context that originally produced it.  Since Wilson has erased people of color and their history of freedom struggles from the world of the video, the most coherent meaning to be found in the piece is that owners of Nokia N8 Pink phones become slaves to fashion.

Here is a clip of Loie Fuller's famous "Serpentine Dance" recorded by the Lumière brothers in 1896: