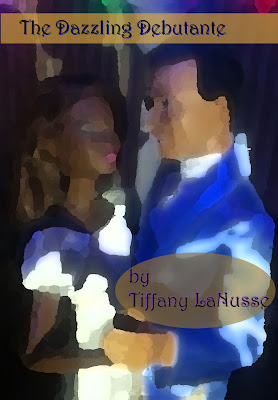 I started reading Regency romances after devouring every Jane Austen novel I could find.  Following in Austen’s footsteps, Georgette Heyer and Clare Darcy created a glittering world of impeccably dressed lords and ladies who carried on their courtship primarily through witty repartee. 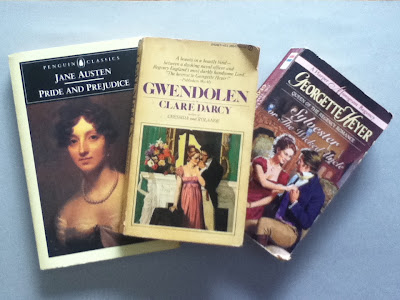 In those old fashioned, “sweet” romances, the hero and heroine never kissed until the final pages when they were safely engaged.  Deserving country misses always had benevolent aunts to transform them into diamonds of the first water and present them to the ton (the upper 10,000 families of Britain).  A young woman had to be careful not to dance the waltz until the patronesses of Almack’s had approved her, and even then she couldn’t dance more than two dances with the same man unless their engagement announcement had appeared in the society pages.  If she played her cards right, though, the demure debutante might end up with a duke.

In the real world, the closest I got to a debutante ball was attending the Chicago Links annual cotillion in 1985.  I spent that summer with my father’s cousin who was a mentor to me like the chaperones who steered the heroines of my favorite novels through the marriage mart.  My Cousin Esther procured tickets to the cotillion for us and then bought me a dress and a fancy pair of designer shoes to wear that evening. 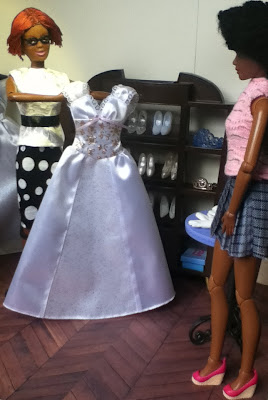 The Links, Inc. has been a sisterhood of African American professional women dedicated to community service since 1946.  Indeed over the years chapters have required their cotillionettes to complete up to 75 hours of service as part of their debutante experience.  Links chapters traditionally organized professional and personal development workshops for their cotillionettes on topics such as Public Speaking, CPR Training, and Preparing for College.  The annual cotillions were major fund-raisers that enabled the Links to donate hundreds of thousands of dollars for scholarships and other community programs.

Today, only a few Links chapters are still hosting cotillions, but the organization as a whole is still preparing young women and men to take their places as community leaders.  It therefore seemed natural to me to imagine the SIS girls as cotillionettes in the Links tradition since the SIS girls devote so much time to mentoring youth.  So here they are dancing the Cotillionette Waltz. 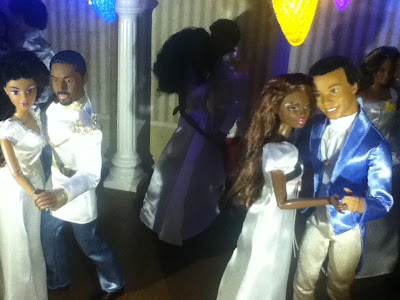 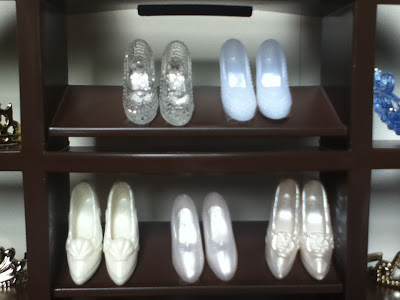 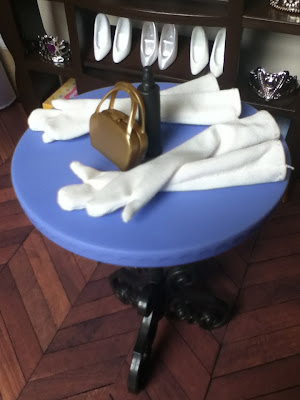 Unfortunately,  I didn’t have enough gloves to go around.

Instead,  after acquiring the Disney Fairy Tale Wedding gift set, I decided to give the cotillion a fairy tale fantasy theme with the escorts dressed as princes.

Kara is dancing with King Dominick from the Princess and the Pauper series. 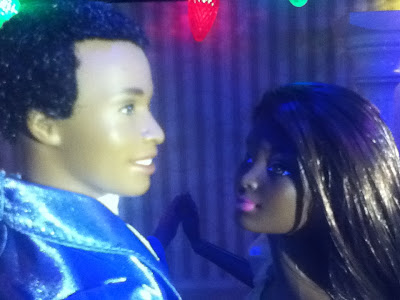 Her empire waist gown and his spencer coat and buff breeches evoke the styles of the Regency era. 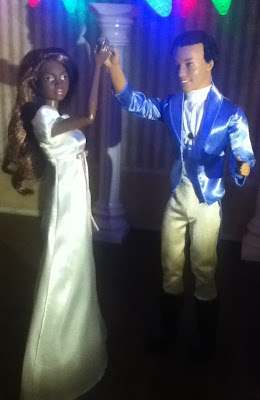 Trichelle’s partner is a Brad doll from the early 80s. 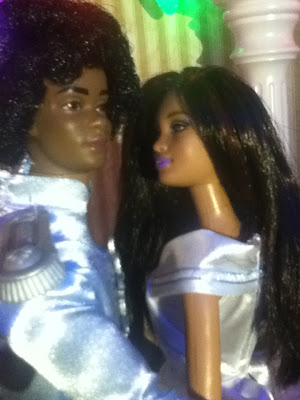 Brad was introduced as the boyfriend of Barbie’s black friend, Christie in the late 1960s.  While the first African American Barbie was introduced in 1980, black male dolls were very hard to find in the Reagan years.  I was overjoyed when I purchased this fellow around 1982.  I named him Yannick after the French tennis player, Yannick Noah. 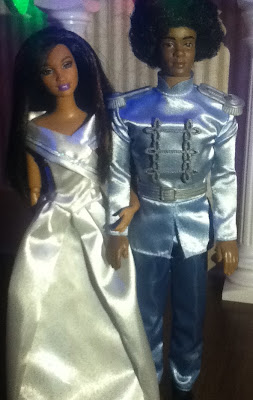 Trichelle and Yannick’s outfits are from the Cinderella and Prince Charming wedding set.

I acquired Marissa’s handsome cavalier at a doll show. 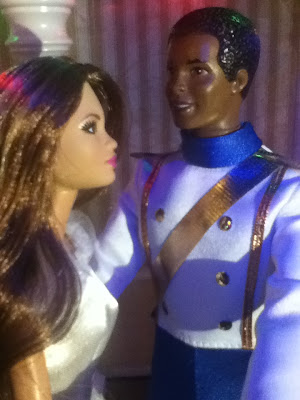 I believe he is a Curtis (Brad’s successor). 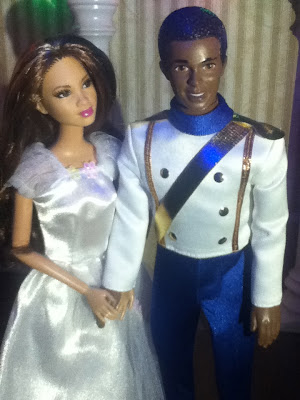 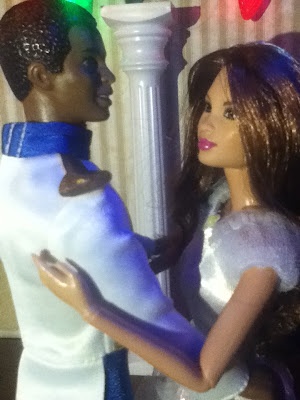 Marissa’s family could not afford a brand-name dress for her, but Curtis thinks she is the most fascinating woman in the ballroom.

Before the SIS line, Mattel created an earlier set of African American friends for Barbie – Shani, Asha, and Nichelle. 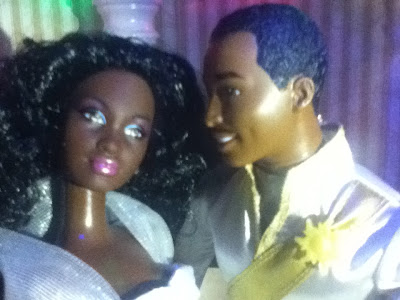 Jamal was Shani's boyfriend but since he is whispering sweet nothings in Chandra’s ear here, he seems to have moved on. 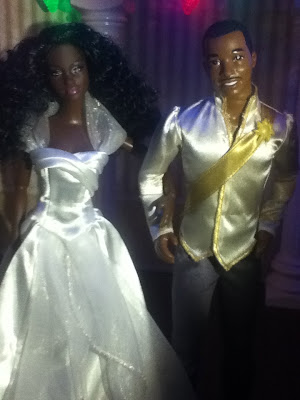 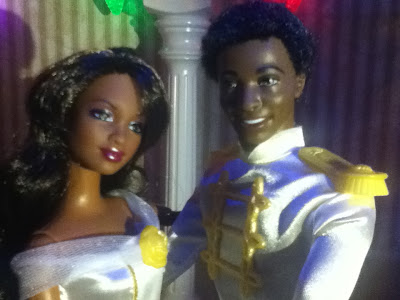 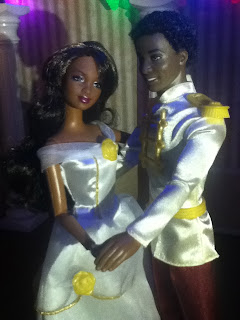 Of course I wanted to attend the cotillion myself so my Chic Boutique doll avatar is swirling in the arms of my favorite Power Team guy. 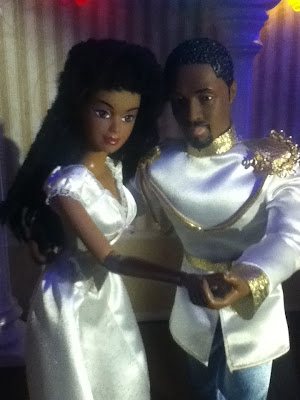 My gown was on the Rapunzel doll in the Fairy Tale Wedding gift set. 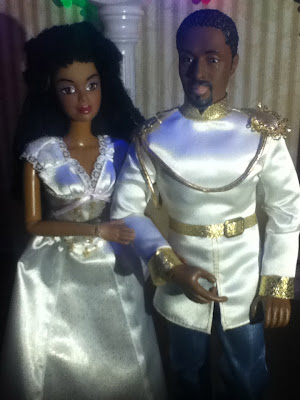 My escort is very debonair in a Prince Charming ensemble from the late 90s. 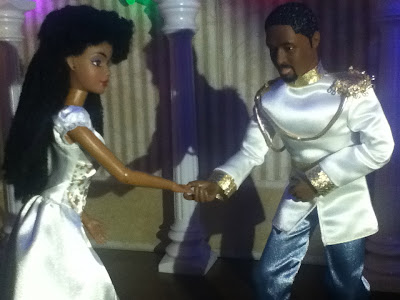 None of the current Prince and Princess outfits are as well made as this old chestnut, and the dolls in these wedding sets all have stiff legs.  It would be nice if Tiana and Prince Naveen had been included in one of these wedding sets since little brown girls need to see that they are as worthy of being courted and cherished as anyone else.   Still, with a 20% off coupon, the clothes alone made this Fairy Tale Wedding gift set a dream come true.

À Bientôt
Posted by limbe dolls at 7:57 AM