Photographing and writing about black dolls in scenes where blacks don’t normally appear in mainstream media depictions of American life played a big role in preparing me for this new journey.   The stories I published on this blog along with those that I chose not to post have healed some holes in my self-image.  Meanwhile, as I absorbed other bloggers’ creativity, I gained confidence in a future where all things are possible.  I am deeply thankful to the following bloggers for sharing their visions:


Black Doll Collecting
Debbie Behan Garrett’s posts are always well-written, meticulously researched, and highly informative.  She illustrates each one with photographs that carefully document the dolls she describes.  At the same time, however the many repair and restoration tips and creative projects she shares make her blog a prime example of how to have fun with your dolls.  Of all her posts I have most enjoyed the “Moments in Black Doll History” series from February 2010 and the follow-up “Black Dolls from around the World” series from March 2010.

A Philly Collector
D7ana’s knowledge of 1:6 scale dolls and action figures is encyclopedic.  She always shares the latest news about new releases and has been responsible for sparking my desire to add many of the dolls and action figures I have purchased in the last two years to my collection.  At the same time she also has a wry sense of humor and has provoked some interesting discussions such as how to treat action figures representing the POTUS or biblical personages with appropriate reverence and respect.

I-Luv-Dolls
Ms. Leo is my favorite storyteller of all the doll bloggers I follow.   I especially like her creative use of backdrops to evoke scenes such as the Laurent family villa in the Caribbean.  One of the things I most appreciate about romance in the blog world is that characters actually take the time to get to know each other.  “Khadijah’s First Valentine’s Day” presents the kind of respectful suitor I would like to encounter one day.  When she finds the time, Ms. Leo also produces some sweet videos such as “Renee to the Rescue.”

Van’s Doll Treasures
When I first discovered that there were blogs devoted to black dolls, Vanessa Morrison represented the artist I wanted to be when I grew up.  While I had dreamed of producing doll videos for years, here was someone who was actually doing it and attracting a large, enthusiastic audience.  Her videos counter negative stereotypes of African Americans by featuring African American and multi-ethnic dolls in vignettes of family life, highlighting the small pleasures and special moments that constitute the most treasured human experiences.

The romance of Daniel Harper and Roderick Taylor unfolded over many months and culminated in a beautiful wedding.  Yet these vignettes are not pure saccharin.  The wedding ended in a surprise plot twist that healed a long-standing family estrangement.  Further, the Taylor household is a blended family and as is often the case in real-life, shared custody and former spouses with un-resolved issues can create some drama (“Nicole Goes Home”).  No wonder Morrison's You Tube channel has garnered over 3,000 subscribers and almost 5 million views!


Brooklyn Stars Forever
In 2009, the on-line dating site, O.K. Cupid  published a study entitled “How Your Race Affects the Messages You Get.”  The disheartening data showed that black women and Asian men were most likely to be overlooked in the on-line dating scene.  Ebony Nicole presents a heart-warming solution in her series of videos featuring the romance between Addie, an African American dancer, and Takeo, a Japanese-American special agent.

Hey It’s Muff
Muff first made her presence known through the humorous comments she posted on other blogs.  Her own blog subsequently became an invaluable resource for tutorials on building sets and modifying dolls.  Her stories about another black woman/ Asian man romance have set a new standard for doll videos with outstanding scripts, detailed set design, and expert cinematography.

All 4 Barbie
One of the pleasures of blogging is connecting with people from all over the world who share common interests.  It has been very encouraging to receive complimentary comments from the Spanish blogger, Marta.  It has also been very impressive to watch her attract almost 800 followers since February 2012.  My favorite All 4 Barbie post puts the latest Barbie from Spain to work as a cultural ambassador, explaining the Feria de Abril.

Plastic Adventures
Sergio brings a refreshing male perspective and an engaging sense of humor to his comments and posts.  I have especially enjoyed his photo stories inspired by the Goth doll craze:
"Never Judge a Book by its Cover" in which Monster High Tora Lei encounters the Midnight Magic girls and "Plastic Horror 1" in which clone zombies attack the branded dolls.

Smidge House
Smidge”s “Flashback Friday” reminiscences about doll play with her sister brought up many fond memories from my own childhood.  The craftsmanship in her 1:6 scale furniture was impeccable and it was exciting to see her work gain recognition as she garnered commissions for 1:6 scale sets from Hollywood.  Smidge has temporarily suspended her blog but I'm sure she will come back better than ever.  Best wishes!

Creazione – Creation in Miniature
Em’lia is in a class by herself.  I was initially enchanted with the fin de siècle doll house she created.  Although I didn’t discover her blog until after the 2009 Couture Doll Design Challenge had ended, I found her posts about the creative process behind her victory in the contest to be riveting.  While her Innamorata dolls will probably always be above my touch, it has been wonderful to watch her bring her artistic vision to life.  In particular I appreciate her Nnaji sculpt which truly shows the beauty of African women.

Thrift Store Dolls
It was clear that Frannie’s heart was open to the whole human family because she delighted in dolls of every stripe and had positive comments for everyone.  Her plucky spirit reveled in small pleasures throughout her battle with cancer.  Her death was a great loss to the doll community.
***

In 1803 a group of newly arrived Ibo captives who had been sold at the slave market in Savannah, Georgia seized control of the vessel that was transporting them to plantations on Saint Simons Island and drowned the crew.  When they ran aground in Dunbar Creek, they waded into the swamp in an act that contemporary observers described as a collective suicide.  Their "death before enslavement" spirit has inspired many African American folktales and literary works that imagine they succeeded in walking across the water or flying back home. 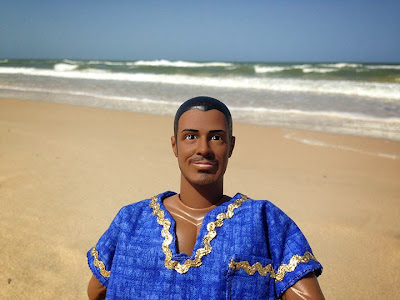 The stories we tell ourselves and each other through the serious business of doll play are a form of creative visualization that can free the mind and foster faith in infinite possibilities.  May our dolly daydreams carry us all home.