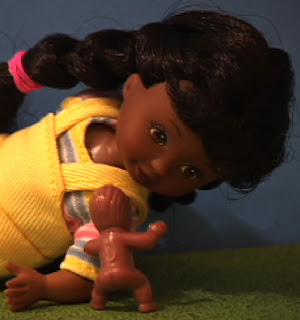 I have been following blogs about 1:6 scale dolls and action figures since the first of the year.  I had intended to wait until June to start my blog, but I wrote so much in response to the Baby Beatriz Doll Project survey that Debbie Garrett posted on her Black Doll Collecting site that I decided to answer the questions in a series of blog posts.  Here is a link to the Black Doll Collecting post.

I’m also taking the opportunity to give a shout out to the wonderful community of bloggers that I first discovered through Vanessa Byers’ “Don’t Just Play Barbie, Be Barbie” blog.

Doll Griots – Remember the elders in your family who could break down who was cousin to whom for every family in the community?  These bloggers painstakingly identify dolls from all over the world, scrupulously document the history of dolls of color, and tirelessly advocate for dolldom to represent the full spectrum of the human family.

D7ana at "A Philly Collector of Playscale Dolls and Action Figures"


"Dolls of Color:  Reflections of a Human Sized World"

Playful Spirits – Remember the kid on your block who could always think up the best “let’s pretend” games?  These bloggers create engaging characters and vividly imagined stories that keep me eagerly waiting for the next post.

Tracy at “Dolls and the City”

Models of Artistic Excellence – Remember the kids in art class whose work made your best efforts look like mud pies and kindergarden scribbles?  These artists generously share their creative processes and techniques so that instead of giving up in frustration and despair, we all have standards of excellence to aspire to:

Courage – Remember your older cousin who was brave enough to tip down into the basement in the dark in order to convince you there was nothing to be afraid of down there?  This special lady has shared her blessings along with some of the dark corners of her life to help us appreciate our days in the sunshine all the more:

Toni Burrough at "My Dolls Story"

Finally a very special thanks to Vanessa Morrison at "Van's Doll Treasures"whose lushly detailed videos reminded me “this is what I want to do when I grow up” and whose warm encouragement has helped me start to realize my childhood dreams. 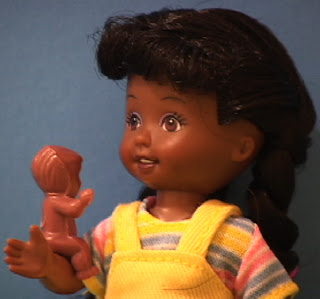 On to question number one in the Baby Beatriz survey:

“Did you play with baby dolls when you were a child?”

I did play with baby dolls when I was small, but by age 7 or 8 I switched to 1:6 scale fashion dolls and action figures and have preferred them ever since.  Even when I was younger I liked the “toddler” dolls that would walk with me when I raised one arm better than baby dolls.

As an adult collector, some of my 1:6 scale dolls have baby dolls, but interestingly enough in a collection of about 400 dolls I only have one baby doll.  Here is a picture of Kirikou, named after the hero of the animated French film, “Kirikou and the Sorceress.” 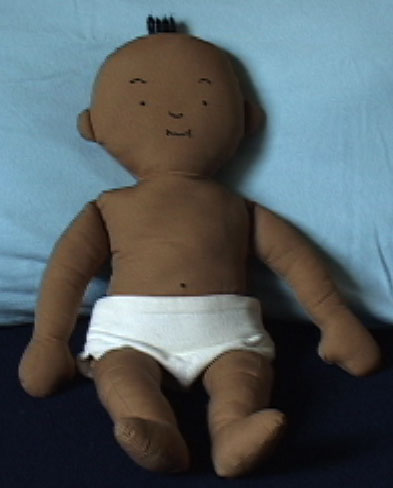 I made about six dolls in a range of skin tones from this pattern.  Kirikou is the only one I kept for myself and he sleeps with me every night.  Unfortunately he hasn’t metamorphosed into a handsome prince like his namesake. :-)

Michel Ocelet, the animator who directed “Kirikou et la sorcière” drew on a variety of traditional African art styles and memories of his childhood years in Guinea to create the landscapes and beautiful visual style of the film.  Here is a link to a You Tube clip of the first 9 minutes.

Some viewers have flagged this clip as inappropriate because it contains some nudity (practical and customary in a tropical setting) so you will have to sign in and verify your age to see it.  The story is a poignant fairytale appropriate for all ages.  This version is in French with English subtitles.  You can watch a short preview dubbed in English on Amazon Instant Video. 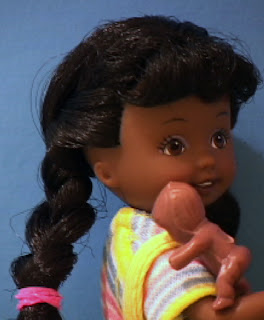