Note:  This post is intended to stimulate adult discussion.  Please preview it before sharing it with children.  The last photo contains some nudity. 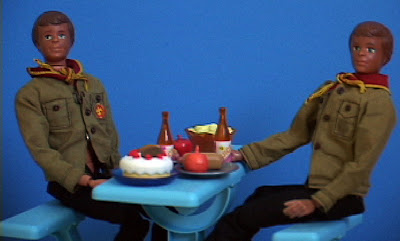 Robert and William Guy were two of the main characters in the play scale adventures my brother and I shared as a child.  Identical twin sons of Colonel Joe Guy, retired (G.I. Joe), they were distinguishable only by the fact that Bob’s eyes appeared more blue and William’s more green.  So they were known as Bluey and Greeney.  In temperament, however, they were direct opposites. 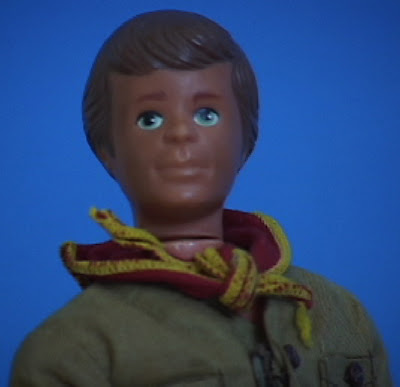 Bluey was the leader of the “Be Good Club.”  He made straight “A’s” in school and was a model of good citizenship. 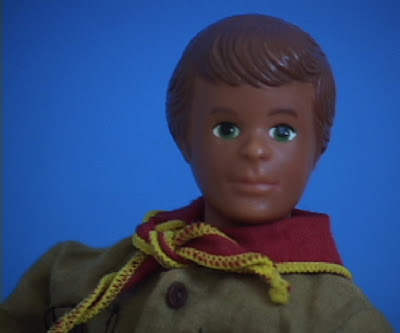 Greeny was the leader of the “Be Bad Club.”  One of his biggest pranks was rigging a concealed movie camera to take footage of his father making out with a hot date (Colonel Guy was shopping for Mrs. Guy #3) and then projecting it at the local drive in one Saturday night.

Originally we developed these characters around a pair of finger puppet dolls from Toys R Us.  The doll had a torso, arms, and oversized head, but you could “animate” it by inserting your fingers into the legs of its jumpsuit.  We had a third doll like this -- Bluey and Greeny’s half-sister, Millie.  Here is her head -- 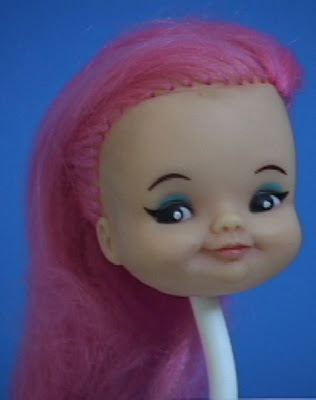 and here are her boots -- 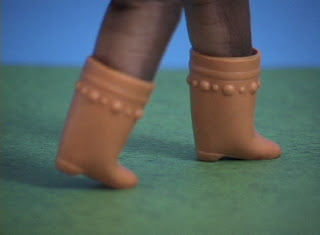 all other parts and accessories related to these dolls disappeared long ago.

My first “re-bodying projects” came from the need to find dolls that represented favorite child characters as they grew up.  Bluey and Greeny were very late bloomers who suffered greatly from being the shortest kids in their junior high school, but finally I found a solution which brings me to question four in the Baby Beatriz Project survey:

Have you ever gone to a store (as a child or presently) interested in buying a black doll? If so, what did you experience? Were you happy with the selection at the store? Why or why not?

From a very young age I consciously sought out black dolls.  I have very rarely been satisfied with the selection.  One of my great regrets as a collector is that I could never find any Bob Scout dolls in the store.   I bought two of the white Steve Scout dolls when I was in junior high school.  These bodies enabled Bluey and Greeny Guy to catch up with their peers and in honor of his new status, Robert (a.k.a. Bluey) insisted on being called Bob.  Greeny remained Greeny until he took up Spanish in high school (by then he was in the guise of Kenner’s 12” Han Solo doll) and started practicing his language skills with a Chicana girlfriend who called him Verde.  Jack, the black character in the Big Jim action figure series, was the lone black student in the school.

I envy Roxanne of “Roxanne’s Dolls” because her Bob Scout makes a perfect match for her Calista.


I love Roxanne’s video of Calista and Bob’s first dance because it shows black kids in a sweet and innocent first romance.

In recent years I have seen some Bob Scout dolls on eBay, but because they were so rare, they are much more expensive than the white ones.   My own experience with Bob/ Steve Scout exemplifies Kinsale’s distinction between characters readers or viewers identify with and characters who serve as placeholders allowing readers or viewers to project themselves into the scene because my identification with Bluey and Greeny was not only transracial, it was also transgendered.

Bluey and Greeny were originally characters my brother controlled.  As we got older, his interest in playing with dolls was not as strong as mine.  Meanwhile Greeny’s relationship to his childhood best friend, Skipper, provided an opportunity for me to work through my own “interior conflicts and passions, my own ‘maleness.’”  My Skipper was a hard core tomboy.  In junior high school when the other kids started pairing up in romantic couples, she just wanted to be Greeny’s best friend.  After they finished college, she eventually succumbed to social pressures and married Greeny, but when she became pregnant with their first child, she could no longer bear living in the body of a woman.  One morning Greeny got up to use the restroom and discovered he had become a woman – Skipper.  She had figured out a way to take over his male body and had no intention of giving it back until after the child was born – if then. 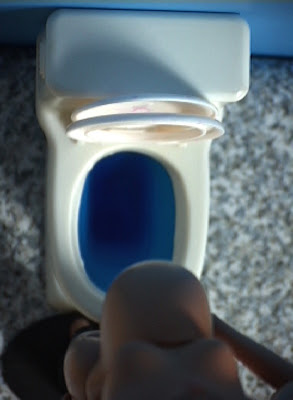 I always intended to write that story as a speculative fiction piece, but then I discovered Octavia Butler’s “Bloodchild,” the definitive pregnant man fantasy.  In my mind’s eye my dolls are all aspects of myself, regardless of their color or gender, but my multi-ethnic collection enables me to create a world in which I can more comfortably express my black female point of view.