Today is the sixth anniversary of the day Hurricane Katrina made landfall in the Gulf South.  My heart goes out to those who lost electrical power, property, or loved one's lives during Hurricane Irene this weekend because I am still displaced in the sense that I may never again have the job security that I had before the storm.  So today I thought I would post a journal entry about my impressions of New Orleans during my first visit.  Little did I know I would end up living there for nine years or that the intense racism I wrote about in my journal would turn the natural disaster into one of the most disgraceful man-made fiascos in the history of the United States. 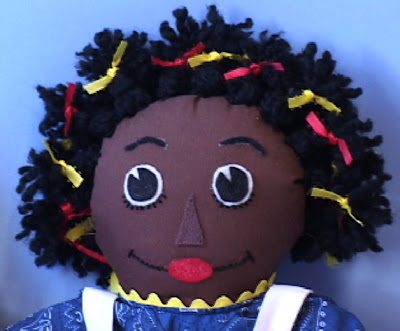 I thought of New Orleans as a place I could settle.  I couldn’t live here.  Not with all those pickaninnies grinning in my face every time I turn the corner.  Maybe it wouldn’t be so bad if the cards that come with the dolls didn’t romanticize the slave experience:

“In the days of the old South, the women worked in the fields as well as the men.”  [Yes, even when heavily pregnant they were forced to work in the fields.]

“The big cotton bag was attached to their waist or over their shoulder.”
[Some of them slung their nursing infants on their backs or laid them down at the end of the row while they worked.]

“As they passed along the rows of bushes they would hand-pick the cotton balls and put them in the bag.”
[And at the end of the day the overseer would weigh each hand’s output.  If Nola had not met her quota, she would face a beating or worse punishment.]

“The filled bags were then put on wagons and hauled to the barns.”
[After which the slaves used to chant:
‘Ought for ought,
figure for figure,
all for the white folks,
none for the n*****r’]

“Even today, there are small farms in the South that still harvest cotton in this manner.”
[Because after Emancipation the sharecropping system forced the majority of the freedmen into a perpetual debt peonage, which merely served to continue slavery in a more convenient form.]

Like Aunt Jemima, Leanna the street vendor, Cleo the market lady, Antoinette the seafood lady, and Odelia the praline lady were all described in terms that associate black women with good things to eat.  The history of their suffering was cheerfully erased – “she was respected by the other servants and loved by the family she served.”  But in the endearing brown face of “Ninkie circa 1700” I saw the stolen childhoods of generations of my ancestors:

“In the old South, it was a familiar sight to see little black girls playing together, or doing chores with their hair plaited into many braids.”
[My grandma went to work in white folks’ kitchens when she was so young she had to stand on a box to cook their breakfast.  She never had the chance to attend school.]

Meanwhile “Jody” the lone black male doll had no text.  Don’t black men have a story?

The story assigned to “Scarlett, Southern Belle” was a disgrace to Margaret Mitchell’s strong-minded heroine:
“In the days of the old South, it was improper for a lady to show her ankles.  This is why she wore a long full skirt.
[Patriarchal control of female sexuality enslaved white women right along with the population of chattels.]

“Her wide brim hat and parasol was to protect her skin from the sun.  ‘Ladies’ were not allowed to have sun-tanned complexions”
[Under the racial caste system of the antebellum south, dark skin became a marker of enslavement.  Alabaster skin separated the well-to-do from the laboring classes who could not avoid field work]:

“She often liked to collect flowers from her garden to adorn the house”
[as if the garden club is all that Southern ladies were good for.]

When I got to Creola the clerk said “This gon’ have to be your last one.”
I said “Okay.”  It was the last one I saw anyway.  Then he came over to explain that he wouldn’t have said anything to me but his boss would give him hell for letting me copy down what was on those cards.  Then he asked if I was doing a school project.

I said no, I was going to write a letter to the company.  “This is disgusting.”
He tried to excuse it by telling me lots of black people bought those dolls.  I said they need to know that this is not a black-owned company and that Gambina Doll is romanticizing slavery.  He said go ahead but it probably wouldn’t do any good.  I said I knew that but it would make me feel better.  Stuff like this is ragweed and if I don’t kill it now, in a flash it will have proliferated so much that I won’t be able to breathe.

À Bientôt
Posted by limbe dolls at 4:40 AM