When First We Practice to Deceive

"Who the hell are you and what are you doing in my dress?" 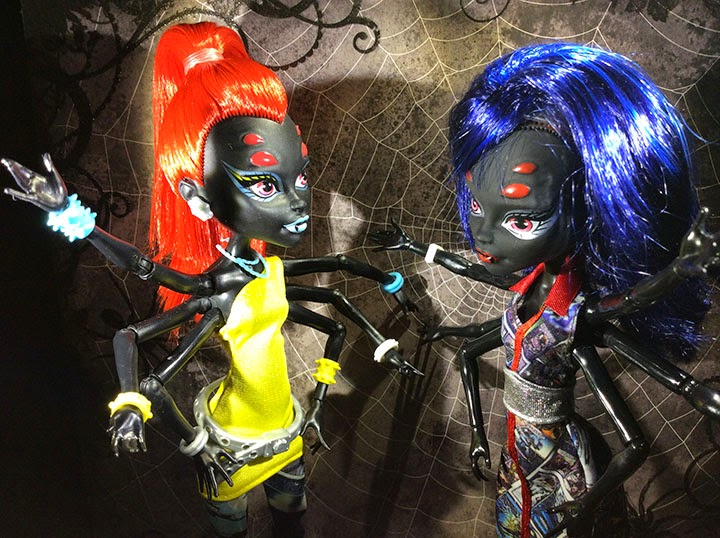 In 2011 Mattel announced a doll election to determine which of three prototype Monster High characters to produce for sale.  Headless Headmistress Bloodgood was a well-established character in the webisodes series.  Scarah Screams had appeared as a backgrounder, but the "daughter of Arachne" was a completely new invention.  Mattel declared Scarah Screams the winner at the 2011 Comic Con convention and produced her as a convention exclusive doll the following year.  In 2012 Mattel released Headmistress Bloodgood as a Toys R Us exclusive doll but did not offer Wydowna Spider, who garnered more votes than Mistress Bloodgood for sale until 2013 when she was the San Diego Comic Con International exclusive doll.

I had long been intrigued with Wydowna Spider's six arms and I felt that a black widow spider would potentially be another "black" Monster High character.  The Comic Con dolls show up on eBay from time to time but sellers were asking as much as $300 so I assumed she would remain out of my reach.  Then various sellers based in China started offering Wydowna Spider dolls on eBay for $24 (shipping included). 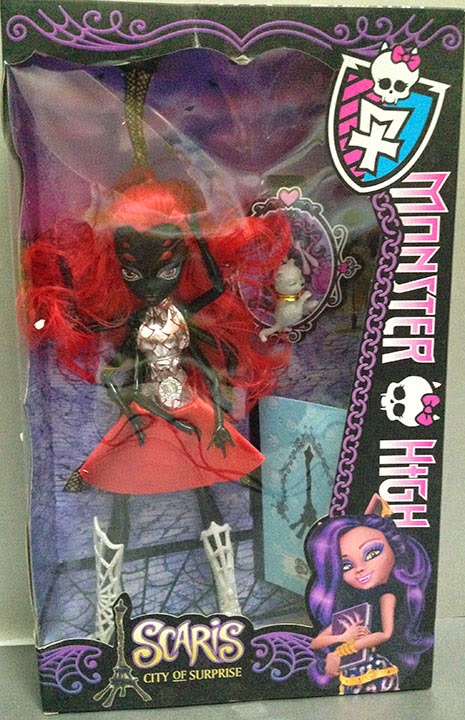 I figured these dolls were pirated but I was angry at Mattel for once again limiting the supply of   "black" dolls.  I found a seller with a 100% positive feedback rating and took the plunge.


Before I could verify that the item had shipped, eBay removed the listing.  I was worried that I might lose my money but the doll arrived at my brother's house in due course and was waiting for me when I returned from Senegal.

Her body was made of cheaper plastic than regular Monster High dolls but appeared to have been cast from the official molds. 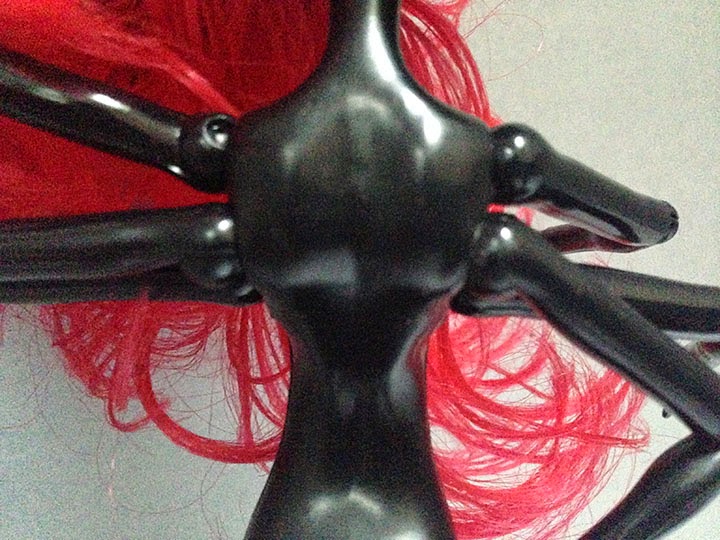 Her dress and hair fiber were of decidedly inferior quality.  I scrapped both. 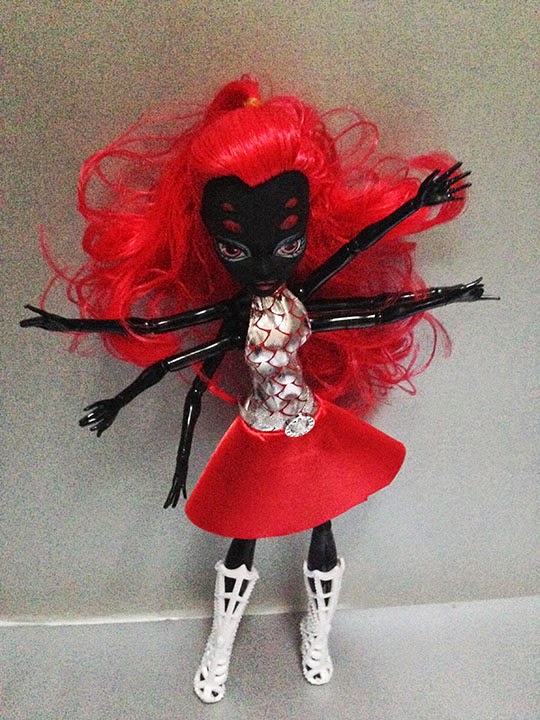 Still, I was happy with the doll until September when Mattel released this play line Wydowna Spider as a Toys R Us exclusive. 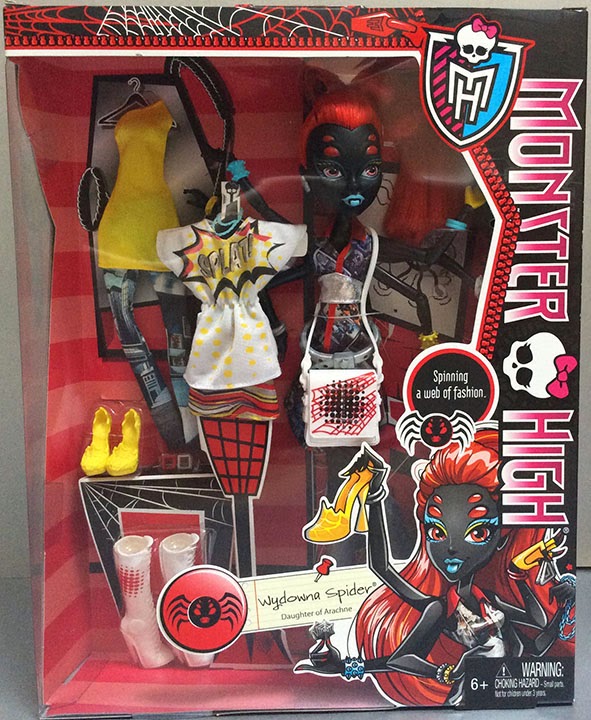 Out of the box the official Wydowna Spider made the inferior quality of the pirated doll even more glaringly obvious.  (The fake is on the left). 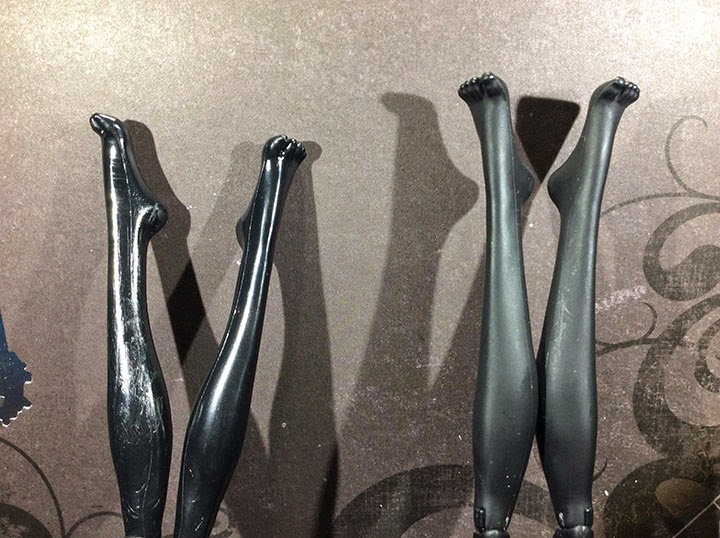 There were slight differences between the bodies as well. 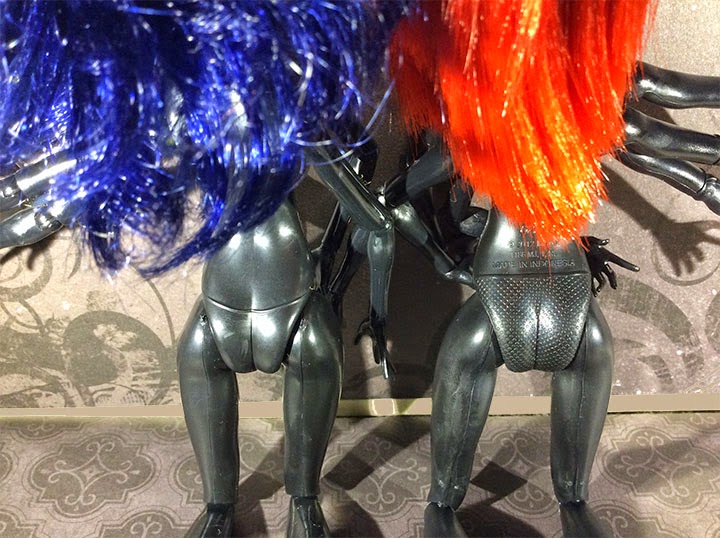 Still, since the official Wydowna Spider came with four outfits, the pirated doll challenged her to a "who wears it best?" duel. 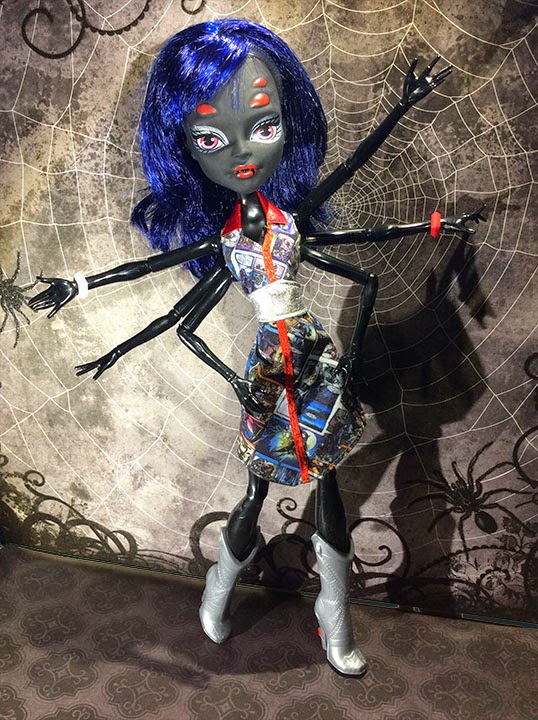 I have renamed the official doll Anansina, after Anansi, the Ghanaian spider trickster hero who is like Brer Rabbit in West African folklore. 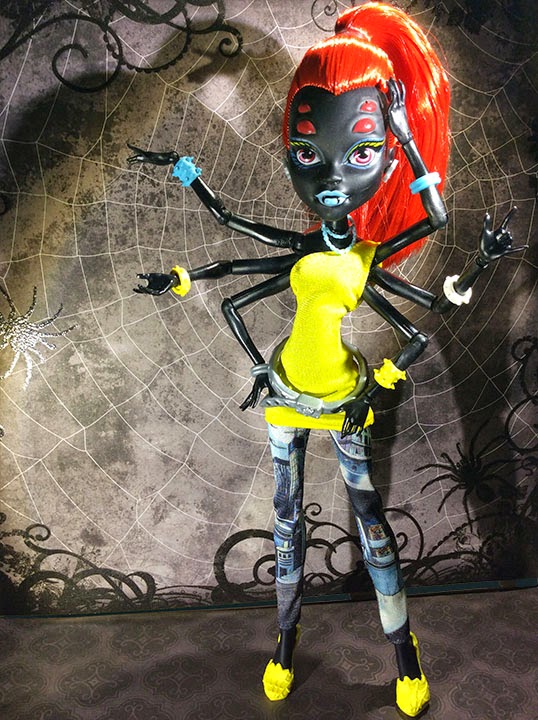 The official doll came with three pairs of footwear, a matching purse, plus two belts and many bracelets. 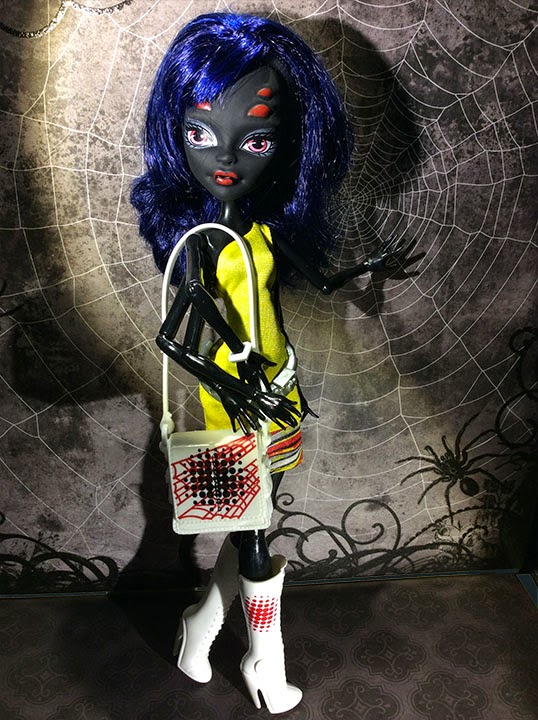 Anansina figured she was a shoe-in for the ultimate diva prize. 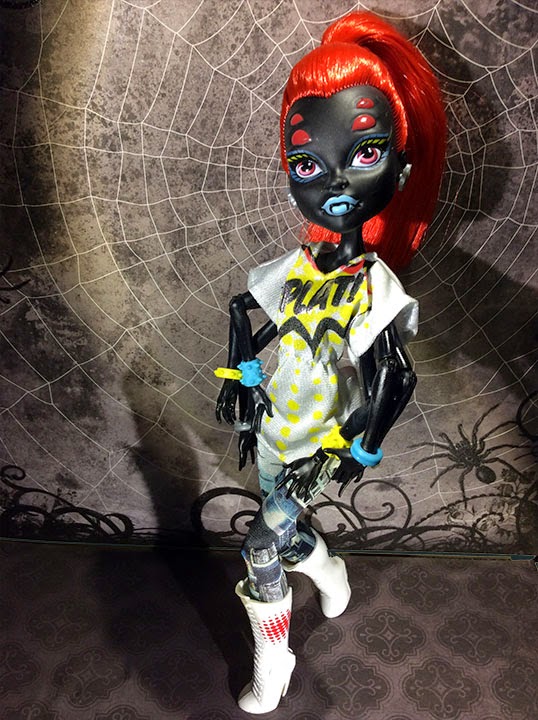 Unfortunately she didn't know who she was playing with. 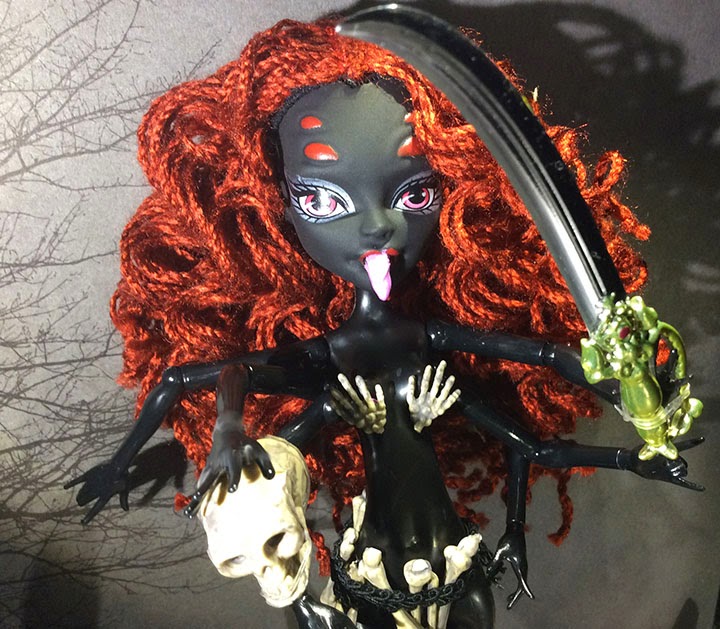 Kali (the black one), is the Hindu goddess of Time, Change, and Destruction.  Slaying the demon Raktabija is perhaps Kali's most famous deed.  The goddess Devi Durga and her assistants tried to kill him but every drop of his blood that fell on the ground turned into a duplicate of Raktabija.  Durga called in Kali for back up.  Kali prevailed by sucking Raktabija's blood and stuffing all the duplicates in her mouth.  Then she did a victory dance on the battlefield, stepping on the corpses of the slain. 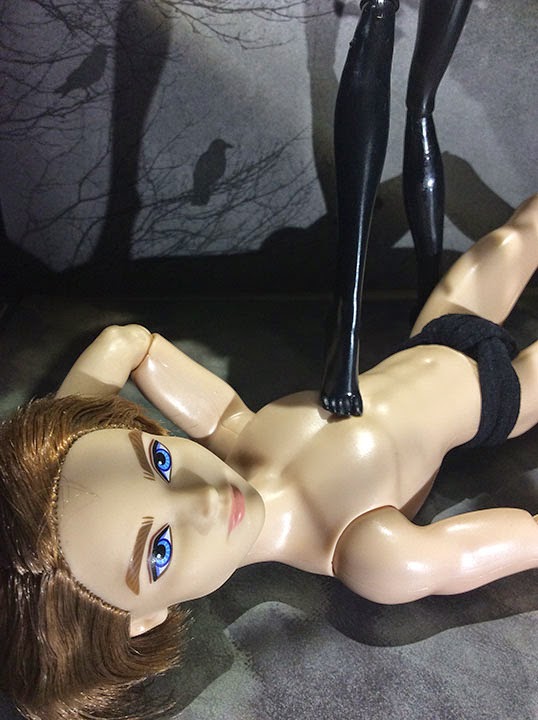 Drunk with the blood of the enemy, Kali was about to destroy the whole universe when the other gods persuaded Shiva to lie down in her path amongst the other corpses.  When Kali inadvertently stepped on his chest and realized her husband was lying under her feet her anger was pacified. 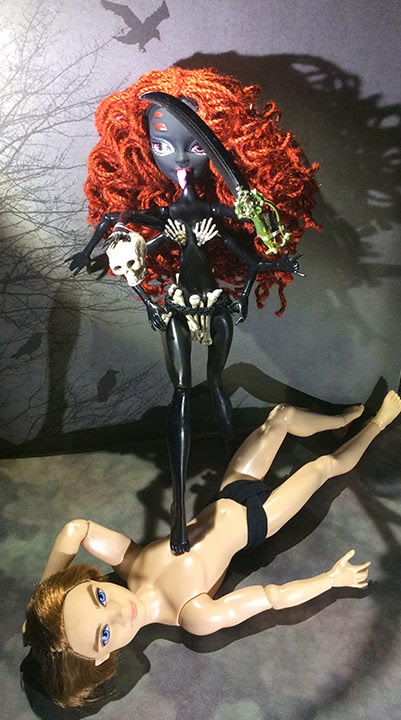 I think we all have days when we feel like our rage could destroy the universe.