When Jeremy Fisher was about 12, he became fascinated with stop motion animation after seeing the “Star Wars” movie.  He began animating his Star Wars action figures to reproduce his favorite scenes.  After completing a Fine Arts degree at Ringling College, he moved to Los Angeles where he has worked on “Marcel the Shell with Shoes on” and “Robot Chicken.”  While he learned to do computer animation in school, Jeremy finds working with physical objects much more satisfying.  “I build things and make them move,” he said, summing up his work as an animator.  I caught Jeremy's Joelanta presentation on the way back from a two week residency at Hambidge where I had gone to work on a stop motion animation project so I greatly appreciated the overview of the stop motion process and the many useful tips he offered aspiring animators.

The basic set up requires a space where the animator can control the lighting.  As the sun moves over the horizon and clouds pass in front of it, daylight constantly changes.  Stop motion animators must therefore use artificial light in order to keep the lighting consistent from frame to frame.  Jeremy set up a mini stage under his dorm bed when he was in college.  Today he does his freelance work in a home dark room.  My studio at Hambidge had no blinds or curtains on most of the windows so I was not able to create the ideal conditions for shooting but back in my brother’s windowless basement my shooting stage looks like this: 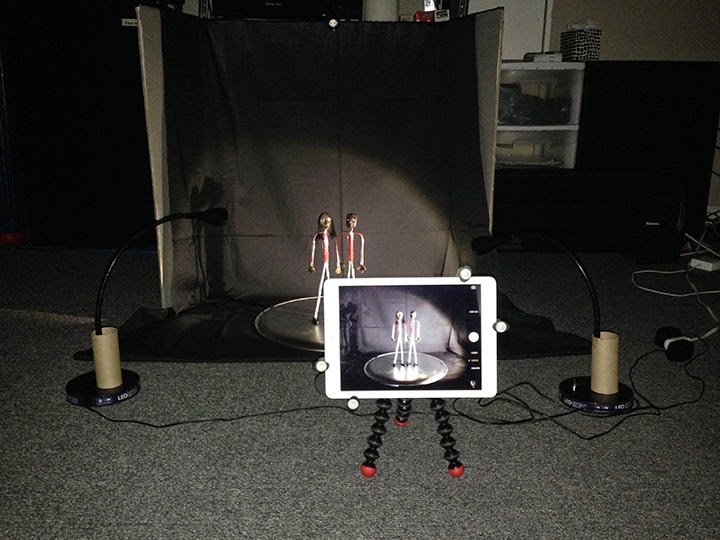 Like most industry professionals, Jeremy uses Dragon Frame, an animation program that costs about $300.  If you have a Mac you can get good results with iStop Motion which I purchased for $50. 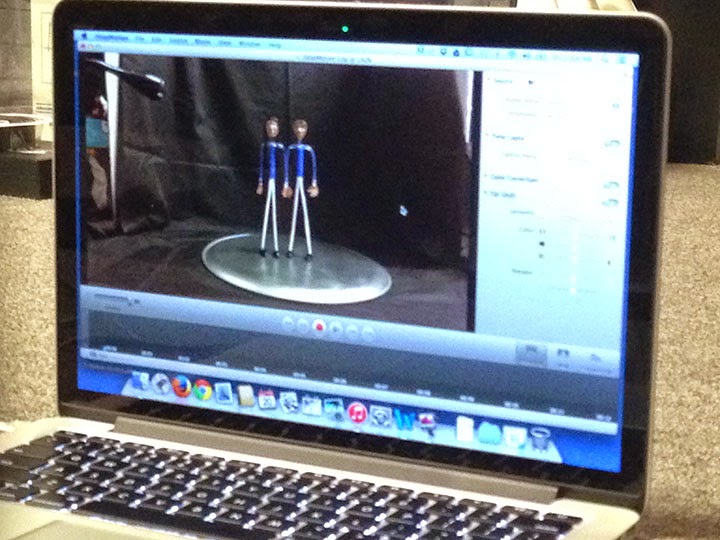 The $10 version of this program will run on an iPad or iPhone while Framegrapher for the iPhone is only $5.  Onion skinning is one of the most useful features that animation software platforms provide.  It automatically shows an overlay of the previous image as you set up the next shot so you can keep track of movement from frame to frame.  This is especially helpful if you accidentally displace objects in the shot and need to put them back where they were before capturing the next image.

Indeed, keeping the puppets stationary in between shots is one of the biggest challenges stop motion animators face.  Reaching in to move a puppet’s hand can displace the figure or other elements in the set, resulting in extraneous movement on screen when the images are played back in sequence.  Stop motion animators frequently glue or peg their puppets to the stage floor while they are working.  I experimented with gluing magnets to my puppets’ feet, but haven’t yet found any glue that bonds securely. 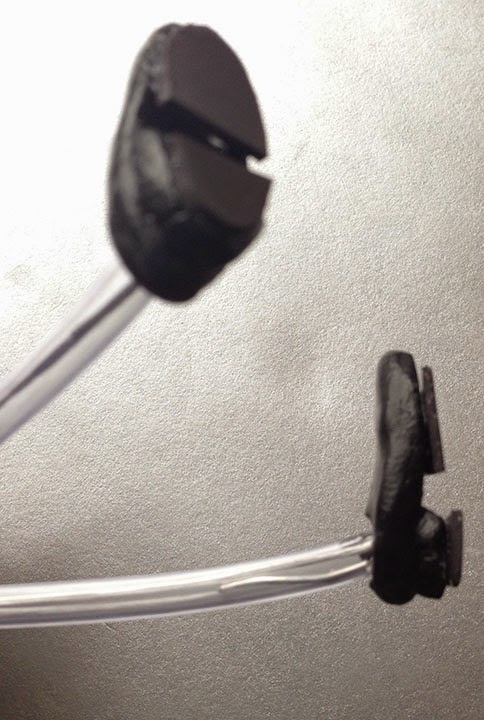 Keeping the camera stationary during shooting is also essential so Jeremy mounts his camera on a tripod that clamps to his table when he is working.  He uses a DSLR camera, but these days smartphones, iPads, iPods, and pocket cameras can all shoot in HD so amateurs can get good image quality with inexpensive devices.  I bought a Joby Gorilla tripod and an iShot G7 Pro iPad holder to mount my equipment. 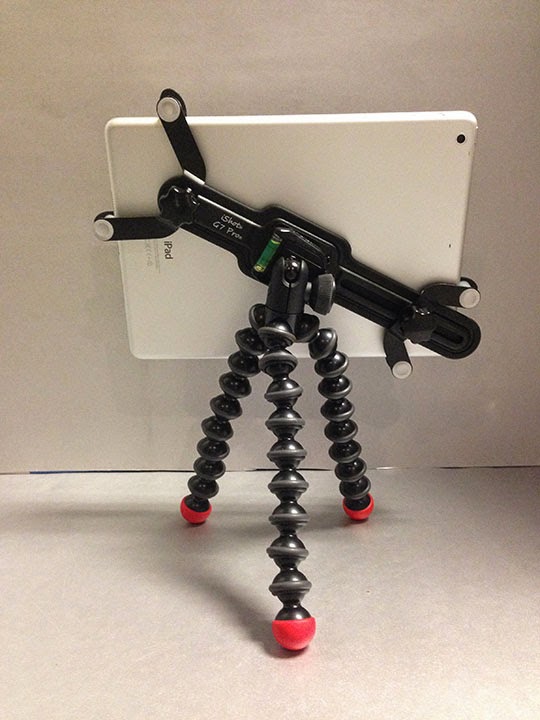 A wireless number key pad enables Jeremy to control the camera through the animation software on his computer so that he doesn’t have to touch it to capture images.  This way he avoids accidentally bumping the camera between shots.  I purchased a wireless remote but there was no WiFi in my studio at Hambidge so iStop Motion was not able to recognize my iPad as a capture device even though it was connected with a lightening cable. 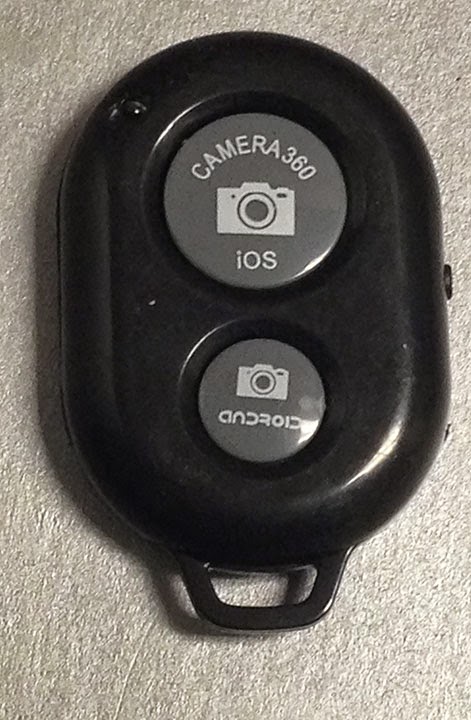 Jeremy collected eight boxes of action figures while playing with stop motion animation techniques in his youth but these days he makes most of his own puppets.  He favors 1/16 armature wire, but notes that there are other suitable types of wire available at Home Depot and even floral wire can work well. 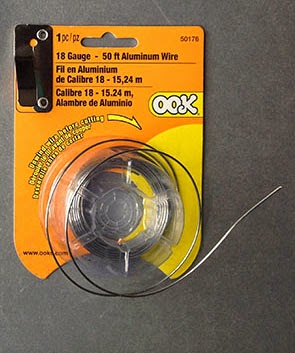 Recently he has begun designing figures on the computer and then having them 3D printed.  Time is of the essence in an art form that requires 700 to 900 exposures for one minute of film.  I worked feverishly to make six puppets from 18 gauge wire and aquarium tubing before heading to Hambidge. 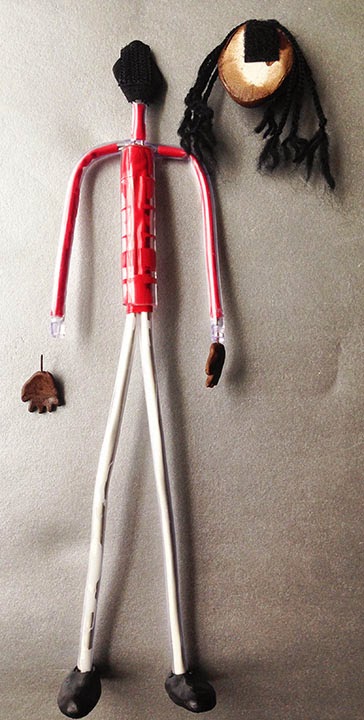 Each puppet has six interchangeable faces representing different emotions and six different pairs of hands all molded from Paper Clay. 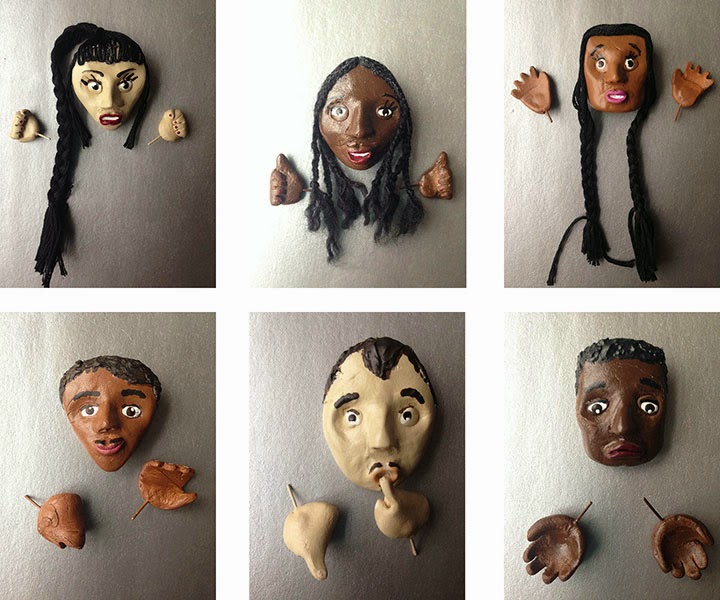 Being able to 3D print those parts would have saved me a lot of time.

Although Helena Smith Dayton, a Greenwich Village artist who sculpted a popular series of clay caricatures produced a stop motion adaptation of “Romeo and Juliet” in 1917, animation remained a “where the boys are” enclave until the advent of You Tube.  Today many girls and women are posting stop motion animation videos that feature their American Girl, Monster High, or 1:6 scale fashion dolls on You Tube and other web streaming sites.  For example Shasarignis has been producing stop motion animation fashion doll videos for years.  Hey, It's Muff recently purchased a smartphone app that can produce time lapse and stop motion video so she has been sharing her experiments with this technology and inspiring us all to try our hand in this exciting medium.  After all why should boys have all the fun?