Baby Beatriz Project survey question 3
As a child do you remember owning black dolls, white dolls or dolls of multiple races? Do you remember being aware of the ethnicities of your dolls at the time that you were playing with them? 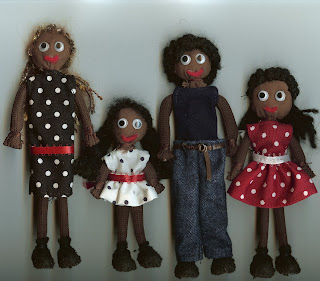 (La famille Diop)
If you’ve ever wondered where all your safety pins disappear to, Mary Norton had the answer.  I discovered her Borrowers series around 4th grade and was immediately entranced by the idea that little people lived in the walls and under the floorboards in old houses and supplied themselves by “borrowing” small items from 1:1 size “human beans.”  I think those books got me started looking at the world as a miniaturist.  Inspired by Arietty’s chest of drawers, I made a nightstand for my 1:6 scale dolls by gluing matchboxes together.  Here is a link to the 50th anniversary edition of The Borrowers on Amazon.com.

In the same period I found a book in the library that detailed how to make pipe cleaner dolls.  Of course I made the main characters from the Borrowers series first:  Pod, Homily, and Arietty Clock.  The next family I made was black.  I named them the Joples after Scott Joplin, the famous ragtime composer.  The Jople family disappeared into the mists of my childhood, but I made the their cousins from Senegal (The Diop family pictured above) for a friend’s daughter about two years ago.  Here is a link to a 1911 piano roll recording of Joplin playing “Real Slow Drag” from his opera, Treemonisha, the inspiring story of a young woman in the post-Reconstruction South, who seeks to uplift her community through education.


Shortly after I finished the Jople family, one of my yellow socks became too sanctified (holey) to wear.  I recycled it to make the Takegawa family (I was reading James Michener’s Hawaii so I named them after the Japanese immigrants featured in that epic novel).  Here is a link to Michener’s fascinating saga about President Obama’s home state.

Before long we had a small village of four room bungalows made out of cardboard boxes.  I wired one of them with lights attached to a nine-volt battery as a 9th grade science fair project.  I had a lot of fun with those 1:12 scale dolls and developed some important sewing and crafting skills at the same time.  It is probably time to introduce my niece to The Borrowers, but every time I set out to make a doll for her, I end up keeping it for myself!