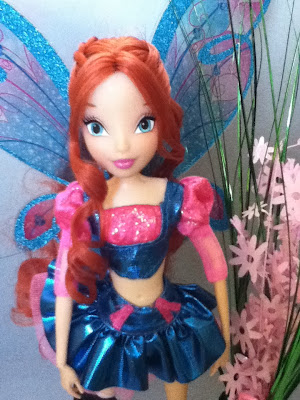 This week I took the plunge and bought a Winx doll hoping to find another source of articulated bodies now that Spin Master is phasing out the Liv dolls.  The basic Winx are quite affordable at $12 but don’t waste your money on any of them unless you love the outfit.  They are not articulated.  Fortunately, for $20, the Believix Collection of fairy Winx offers six characters with articulated knees, elbows and wrists.  I’m a sucker for fairy dolls so I chose Bloom, mainly because I thought I would get the most use out of her shoes. 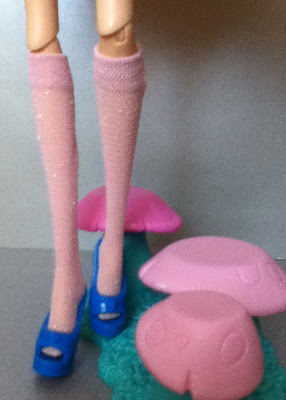 Les Soeurs Garoul are always on the lookout for new fashions they can appropriate so Clawdeen Wolf immediately snatched them up. 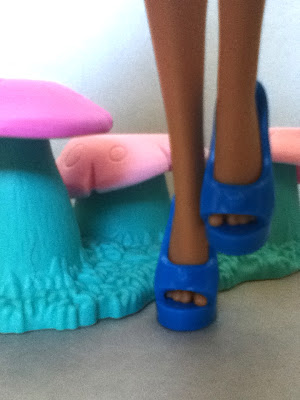 Monster High dolls’ feet are a little longer than Winx dolls' feet, but Clawdeen was able to make these open-toe pumps work for her.  They will also work for your Star Dolls if anyone is actually still using the rigid bodies those girls came with. 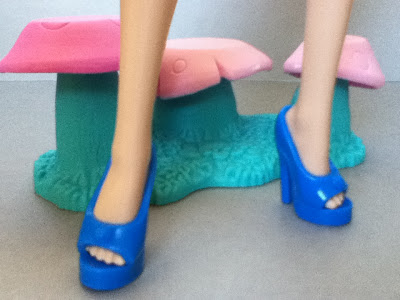 The face-screen has the wide-eyed anime look that has been the norm for most play line dolls in recent years. 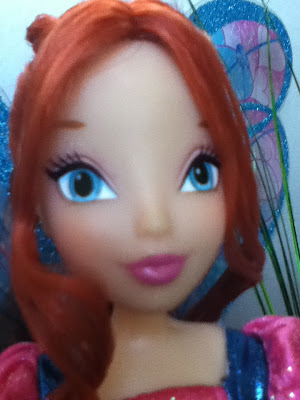 Bloom has a sweet expression, but her flame red hair is made of a cheap, frizzy fiber so she had no chance of retaining her claim to that articulated body in my doll world. 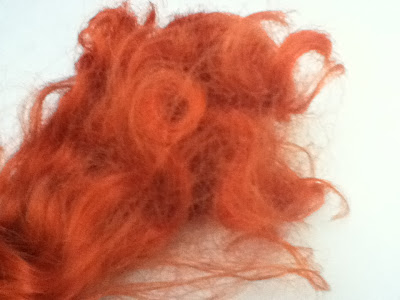 First I tried replacing her head with a Disney fairy.  Vidia was the best match for Bloom’s ivory complexion.  (Note I have two Vidias so I experimented with giving this one brown eyes). 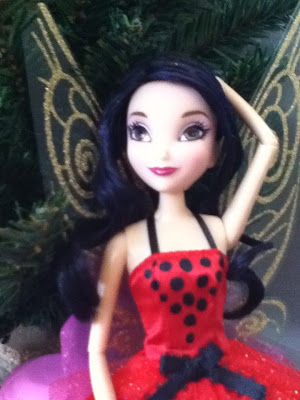 I love the Disney fairies.  Their figures are very graceful and womanly despite their short stature in 1:6 scale.  Unfortunately their legs don’t bend.  I thought it might be fun to upgrade some of them to articulated bodies that have detachable, hinged wings. 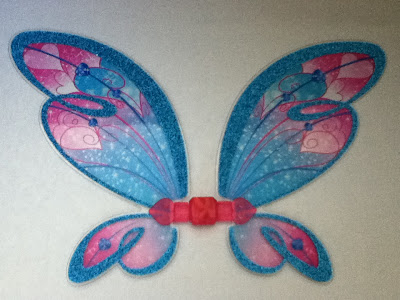 You can even buy additional wings that coordinate with other outfits.  It wasn’t difficult to ease Bloom’s head off the neck prong but her neck is so thin, Vidia’s head rests loosely on it. 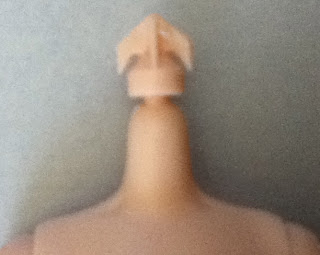 The weight of her hair pulls her chin up, limiting the number of expressions she can convey by tilting her head. 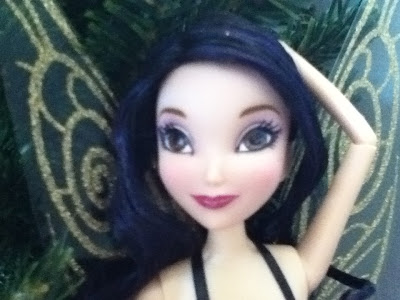 Still, the fact that the Winx body is slim enough to fit some of the Disney fairy outfits is a big plus.

The Winx dolls have longer torsos than the Disney fairies, but their hips are leaner. 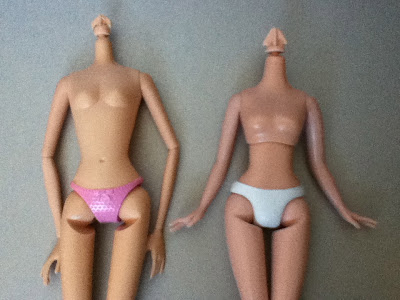 They can wear the Disney fairy dolls’ skirts even though their legs stretch for miles below the hemlines.

While some of the Disney fairy tops are too short for Winx, Vidia was able to adjust the shoulder straps on this dress to make it fit.  She accessorized with a pair of Star Doll shoes. 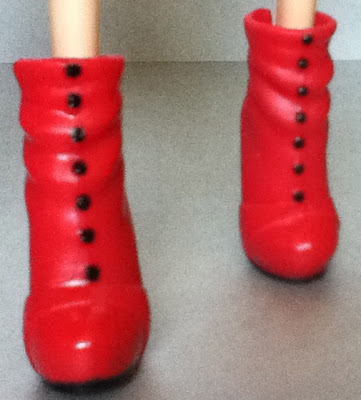 As for Bloom’s outfit, the Disney fairies were able to squeeze their curvaceous hips into the skirt, but the top met the skirt at the waistband instead of exposing the midriff. 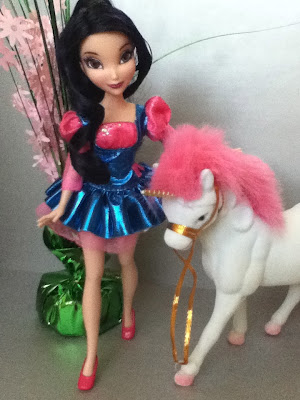 The same was true of the fit when Eloisa tried it on her Bratz body. 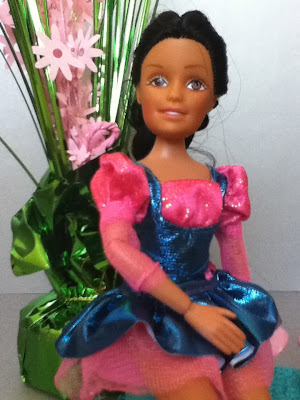 All in all the Bratz, Disney fairies, and Winx dolls should be able to trade a fair number of outfits so if you purchase a Winx doll, you can probably find some changes of clothes for her in your existing wardrobe.

Despite the charm of the Disney fairies, I wasn’t willing to integrate a doll with an over-sized head into my regular 1:6 scale community so next I swapped a Star Doll head onto the Winx body.

This was the only Star Doll face I really liked.  Unfortunately I hadn’t found a good complexion match for her Goth pallor until I tried her on Bloom’s body.  Once again the head sits loosely on the neck, but I find the Winx doll’s wraithlike figure matches the Star Doll’s character.

Although the torso cannot pivot, the articulation of the Winx body allows enough range of motion for the character to make a plausible anorexic ballerina.  She can do the splits. 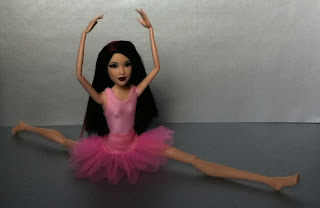 She can stretch in second position.

She has an impressive arabesque 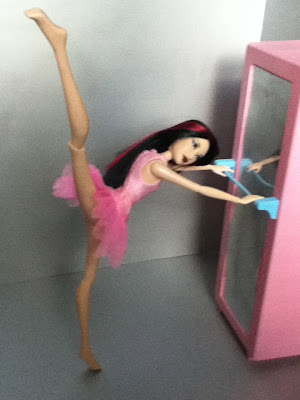 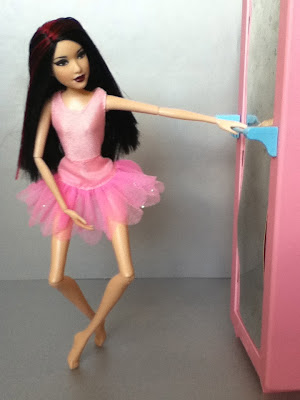 Winx bodies will work well as teenagers in your 1:6 scale families.  Their legs are longer than standard Barbie dolls but they are high waisted with short torsos so the top of their over-sized heads is still below the standard male figures you might cast as their fathers or boyfriends. 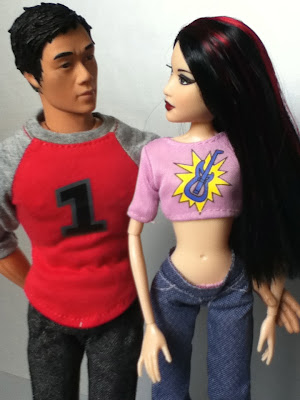 The purchase of a Winx doll includes membership in the Winx club that offers games, quizzes, and videos. 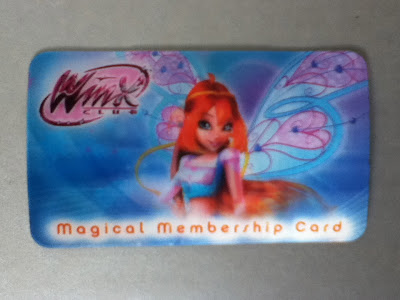 I didn’t explore any of the content on-line but I definitely got my money’s worth.