I have a job interview coming up so I spent part of the holiday weekend making a new outfit.  Since my current job doesn’t pay very much, I am thankful that I learned to sew as a child.  When I was growing up, my parents bought me just about every Barbie I wanted for Christmas and birthdays.  They would not buy clothes, however.  Thus, my first motivation for designing and making clothes was to create wardrobes for my dolls.

When I was in the third grade I took a sewing class at school.

We made a simple skirt and I used scraps from that fabric to make the skirt for the dress above. 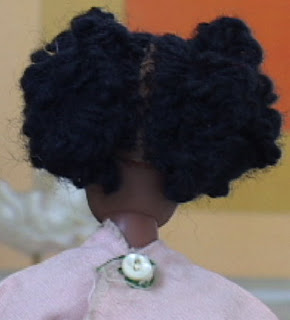 I was very proud of the hand-stitched buttonhole that I made to fasten the dress in the back. 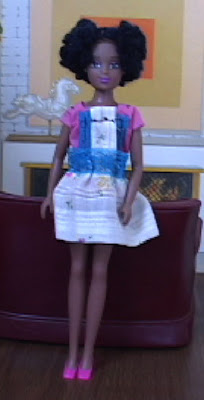 I was about ten years old when I made this dress. It was an approximate copy of a dress that I liked in the Sears catalogue.  Skipper’s redheaded friend, Tiff wore it the most.  I didn’t find a black Skipper or Skipper-sized doll until sometime in the 1990s so I asked Jaquelle to model these outfits and gave her an Afro-puffs hairstyle, which was popular in the early seventies. 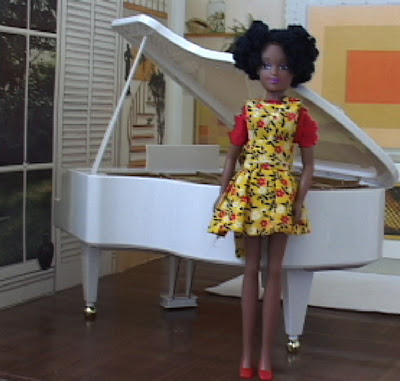 My Skipper was a tomboy like me.  She wore jeans most of the time, but I made this outfit for her twelfth birthday party (I was twelve that same year). 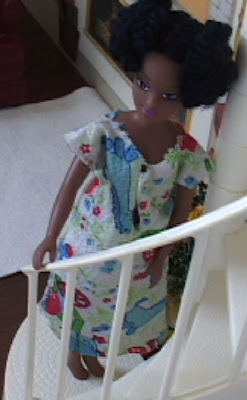 One of my first adventures with using the sewing machine instead of sewing by hand was making a pair of pajamas from this fabric.  Of course my dolls had to have pajamas too so here is Jacquelle on her way up to bed. 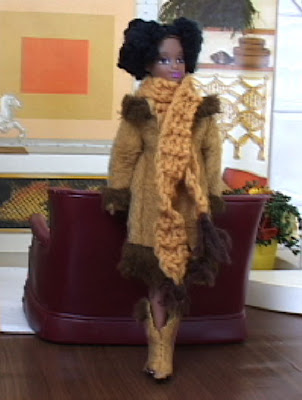 I designed and made this ensemble when I was about twelve.  The coat was one of my first attempts at set in sleeves.

Sewing skills were just one of the benefits I got from playing with dolls.  My first year out of college I realized I needed a dress coat.  The coats I liked started at $300.  I only had $100 to spend so I caught a sale at the fabric store and invested in some heavy beige wool and a simple pattern.  I learned that the seam ripper is the most important tool in the sewing box, but the coat came out so well that I gained confidence to create wardrobes for myself.

À Bientôt
Posted by limbe dolls at 5:38 AM