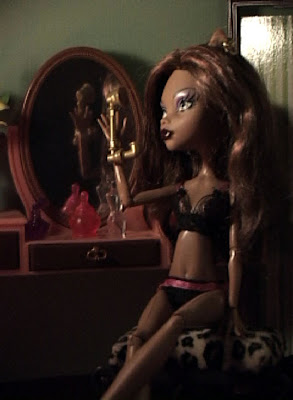 When I was a child, our doll community had “monsters” – usually the result of botched efforts to modify a doll.  It is precisely this type of modification that I feel is an essential element of child’s play.  If children only re-enact scenes and characters they have seen on screen, they have less opportunity to develop imagination and creativity.  So when I first saw the Monster High Dolls, I didn’t like them because they were pre-set characters tied to an animated series.

I also did not like the Monster High dolls’ over-sized heads and swaybacked, anorexic bodies. Yet Clawdeen Wolf was very cute struggling to free New Moon Jacob from his box on Ebony Nicole’s Brooklyn Stars Forever blog.  And then I saw a picture of the green haired, Dawn of the Dance Clawdeen Wolf on Aneky’s Flickr stream. Suddenly I recognized the full power of social networking media as a marketing tool. I looked at Clawdeen Wolf with new eyes and I had to have her. 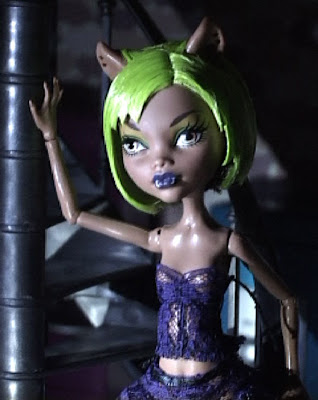 First I bought the original version of the doll because I liked her make-up the best.  Once I got her home, the articulation of that spavined little body won me over.  I stripped her naked and started making lacy lingerie for her.  Within a week I had also purchased the Dawn of the Dance version.  I bought the Gloom Beach version along with her because I didn’t like the painted on black gloves and I wanted to be able to swap out her hands.  I rationalized that I would give my niece a customized version of the Gloom Beach doll with a motorcycle outfit that would match the gloves. 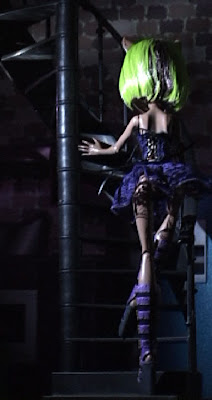 I must confess that I also watched the animated shorts on-line.  I especially liked the idea of a character who experiences power surges rather than PMS every full moon.  I thought there were some interesting possibilities in a woman who is a bonafide b****.  So next I attacked the hair because after all, what really attracted me to Clawdeen Wolf is that by my reckoning she is a black doll.  I wanted her hair to reflect a more Afro-centric aesthetic and I figured my niece might enjoy having a variety of different looks for her doll.  (Of course I was still pretending that I was going to give the Gloom Beach doll away). 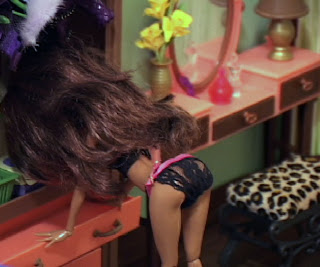 Kudos to Mattel for the quality of their product.  I had so much trouble pulling Gloom Beach Clawdeen’s hair out that I gave up and cut it down to the roots with my sewing scissors.  The ears were my next challenge.  I wasn’t sure how I could make a wig cap that would accommodate them, but it wasn’t as hard as I had feared. 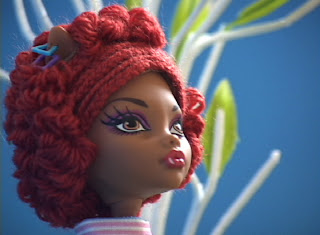 Another thing I had disliked about the Gloom Beach doll was the strange orange lipstick she was wearing, but oddly enough that shade really made the paprika yarn that looks terrible on almost all of my other dolls pop.  So now I have a family of Cajun werewolves from Opelousas, Louisiana.  Claudine and Claudia are glamour girls, but Claudette is more of a tomboy. I thought it would be easier for her to manage her hair if she stopped straightening it and tried some natural hairstyles: 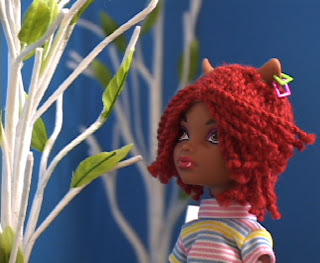 Claudette is so hot with her hair au naturel that I think her sisters, Claudia, and Claudine might have to give up their fake-looking weaves too. 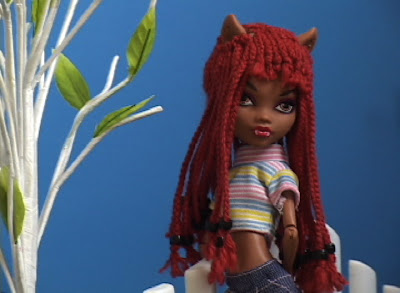 À Bientôt
Posted by limbe dolls at 5:01 AM