“The Negro physiognomy must be freshly and objectively conceived on its own patterns if it is ever to be seriously and importantly interpreted.  Art must discover and reveal the beauty which prejudice and caricature have overlaid.  And all vital art discovers beauty and opens our eyes to that which previously we could not see.”  (Locke, Alain ed.  The New Negro, New York:  Touchstone, 1997.  p.  264) 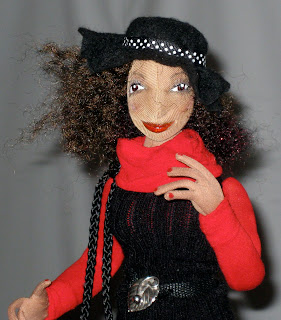 In 1925, Alain Locke urged African American artists to find inspiration in “The Legacy of Ancestral Arts” by looking to Africa as “one of the great fountain sources of decoration and design (The New Negro 254).”

(photo by Trish Mayo)
Locke argued that the experience of slavery had disconnected African Americans from the aesthetic values that produced African masterpieces such as the bronzes of Benin (see the 16th century head of an Oba from the Metropolitan Art Museum collection above) and he asserted that “…what the Negro artist of to-day has most to gain from the arts of the forefathers is perhaps not cultural inspiration or technical innovations, but the lesson of a classic background, the lesson of discipline, of style, of technical control pushed to the limits of technical mastery.  A more highly stylized art does not exist than the African (256)."
Locke noted the profound influence of African art on the development of modernist sensibility in Western art and heralded the dawning of an art movement among young African American artists such as Aaron Douglas at a time when few African Americans had the means to travel to Africa or to museums in Europe where collections of African art works were available for study.

Today the influence of African art is undeniable.  The Harlem Renaissance and the Black Arts movement a generation later have re-connected African Americans to their aesthetic roots in Africa, and affordable “Africanesque” if not authentically African pieces are readily available in the home décor departments of major retailers.  Furthermore, a significant number of the doll artists I met at the Atlanta Doll Collectors’ annual doll show on May 7th started as quilters.  Quilting is one of the American decorative arts in which a continuous carry-over of visual rhythms from traditional African motifs persists.  Thus, when quilters turn their design eye to three dimensional figurative pieces, they draw on both consciously chosen and ancestral links with African art. 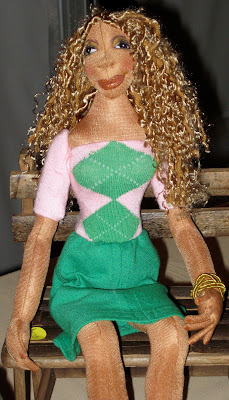 While Mattie Eley’s “people” evoke smiles of recognition as portraits of character types, the stylization of the forms and her imaginative use of decorative motifs are firmly rooted in “The Legacy of Ancestral Arts.”  Collecting art dolls like these enables the collector to express his or her own connection to “ancestral arts.”  For, as David C. Driskell, curator of the collection of Camille O. and William H. Cosby, Jr. collection states in The Other Side of Color “an art collection serves its owner beyond the function of its visual impact.  It provides a cultural context that describes the creative impulse held by collectors. (3).”


The first thing people tend to do when they get a new doll is look up her dress, so Mattie Eley learned very quickly to put undergarments on all her creations.  She had been sewing since she was nine years old, so she started making dolls as Christmas presents for her nieces and grandchildren when she was looking for something to do after her retirement almost four years ago.   In her new career as a doll artist, Eley has become an avid people watcher.  She pays special attention to attire and hairdos and translates the attitudes she observes all around her into her dolls’ needle sculpted faces.  “The dolls got me, I don’t got them” she says of the 20-40 hour process that may start from a piece of fabric that intrigues her.  “I don’t know where I’m going from there” she adds, but the result are profoundly satisfying when someone walks by her booth and says “Oh, that’s my cousin!” 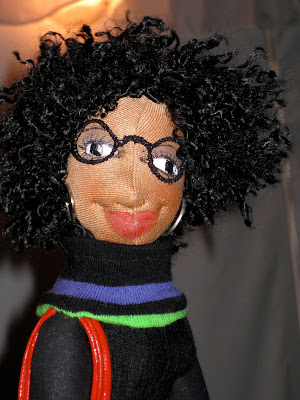