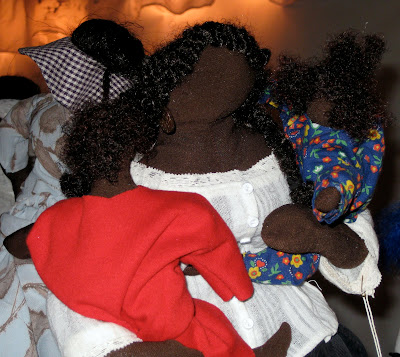 “Long before a doll stood before you, the ancestors chose the doll’s artist and endowed her or him with the magical power to create.” (Whiteman 6) 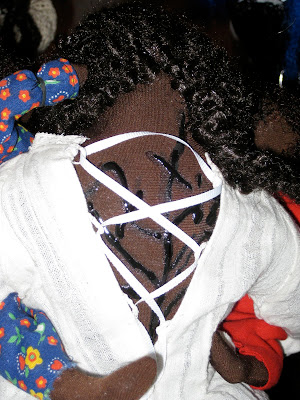 “… he saw the sculpture her back had become, like the decorative work of an ironsmith too passionate for display…” (Toni Morrison.  Beloved.  New York:  Alfred A. Knopf, 1987 p. 17)

In her introduction to Nayda Rondon’s Black Dolls:  Proud, Bold & Beautiful, Barbara A. Whiteman, founder and executive director of the Philadelphia Doll Museum asserts that contemporary doll artists are creating figurative sculptures rather than toys:

The doll artists communicate ideas that are brought to life in the form of a doll.  With a doll, our visual and tactile responses are so strong that we want to touch it, feel it to see if it is real.  So often we say that the doll ‘looks like’ someone we know, or that it is so haunting.  Artistically, likeness, meaning physiognomy, is often regarded as the most significant single element of portraiture, particularly Western art.  The face or portrait, representational in form and naturalistic in style, is what we cherish most in dolls.  When we look into a doll’s face, we establish the psychological connection with the doll.  (7)

The doll artists featured in this book strive to achieve realistic likenesses of black figures.  Among those who would be most familiar to collectors of fashion dolls are Audrey Bell and Georgette Taylor, creators of Big Beautiful Dolls, Mel Odom and Michael Evert, creators of Gene’s African American friend, Violet, and Robert Tonner, creator of Esmé.  In contrast, most of the doll artists I met at the Atlanta Doll Collectors' annual doll show on May 7th were using a more stylized, Afro-centric aesthetic to express aspects of African diasporan experience.  Yet for me, Cassandra Harrison’s faceless dolls established the most powerful psychological connection.  The figure below made me see my mother as a young woman full of hope and touched me so profoundly that I had to come back later after I had composed myself to conduct an interview with Harrison. 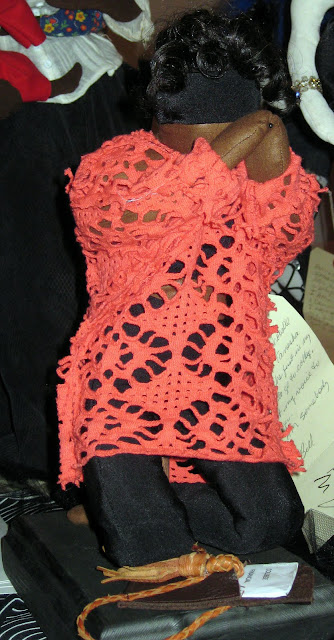 
Whiteman states that “With each order to bring a doll to life, its artist must give up pieces of herself – not only her imagination, but her emotions and energies, until the image penetrates her soul and takes form.  Then – and only then – does the doll present itself.” (Whiteman 6).   Cassandra Harrison has literally invested pieces of herself in order to communicate the ideas she brings to life in the form of her dolls. 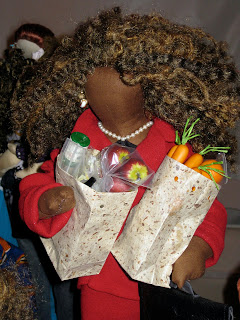 Cassandra Harrison has been making dolls for less than a year, but her one of a kind characters can move you to tears.  After a thirty year career in fashion design, Harrison says “This is my legacy.  Everything I’ve been in life has been preparing me for this.” Harrison kept the six dolls that she made from her own hair for herself, then started using recycled weave hair for new characters.  Indeed, all the materials except the batting she uses to stuff the dolls are recycled.  She even asked her women friends to donate their orphaned earrings so each doll wears only one earring.

Harrison has no idea how long it takes to complete a doll.  She always has two or three in process and doesn’t know what they will be until they are finished.   Indeed, Whiteman likens the process of doll-making to a birth --  “From the first day of conception, a doll struggles for its own identity.  It has its own personality and requires a certain style, fabric and color to authenticate its existence (6).”

Harrison knows the doll is complete when it expresses the I AM – the God within each of us. 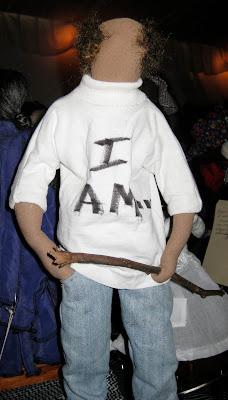 For more images of Harrison's work, view my Flickr Stream.


This post concludes the series about my first doll show, but I'm off to another doll show tomorrow.  Who knows what treasures I will find!