Lucien has invited some friends over to swim.  He wants his grandmother to meet Alexis, a young lady he has been spending a lot of time with of late.  He thinks Alexis could turn out to be very special so he brings Bianca and Phuong along in the hopes that Mémère won’t say anything “off color” in front of witnesses. 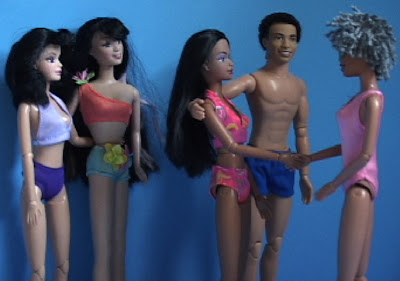 The introductions go smoothly and he and Alexis show Mémère one of the moves they do on the cheering squad at Xavier University where they are both pre-med students. 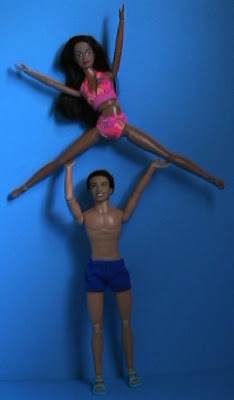 After the company leaves, Lucien interrupts Mémère’s Yoga practice because he can’t wait to ask “What do you think of Lexie?” 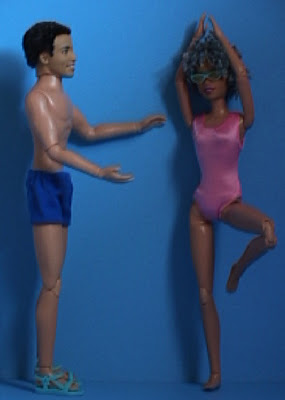 “Well, to be a dancer that child has no behind to speak of,” 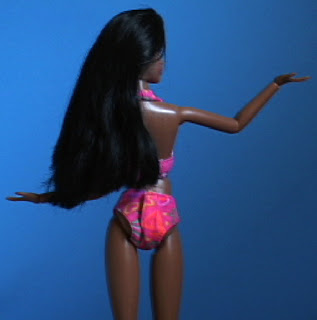 “And you don’t usually see a dark-skinned girl with such long, pretty hair unless it came from the store.  Her people must be part Indian.  Where did you say she was from?” 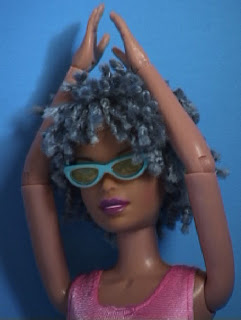 Lucien breathes a sigh of relief.  Maybe Mémère will warm up to Lexie in time.

***
Twist and Dance Alexis comes with a cute outfit 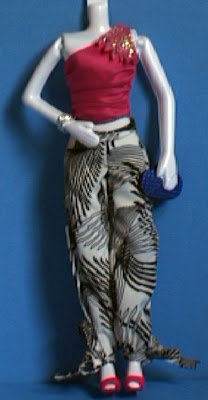 and her milk chocolate complexion is a step in the right direction, 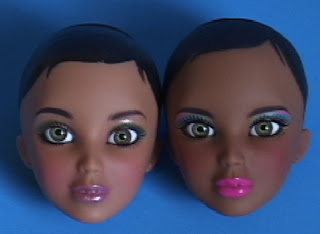 but let’s hope that the Liv company will make some fully articulated dolls (this one’s knees don’t bend and she can’t sit down) whose complexions are darker than a paper bag and whose interchangeable wigs have tightly coiled hair that doesn’t blow in the wind.

Cast
Lucien –  Matching a light-skinned Mattel Steven with a tanned “Making Waves” Jake body is as close as we can get to a black male Fashionista at the moment.

Alexis – a Chic Boutique doll from Kmart was the best complexion match for “Twist and Dance” Alexis.

Phuong – from Integrity Toys did not think that exchanging her womanly curves for greater articulation was a good bargain.

Mémère – an African American “Princess and the Pauper” Barbie on an Alexis “Makng Waves” body, Mémère has traveled to Mysore, India several times to study at Shri K. Pattabhi Jois’ Ashtanga Yoga Institute and hopes to star in a Yoga video soon.
À Bientôt
Posted by limbe dolls at 3:16 PM